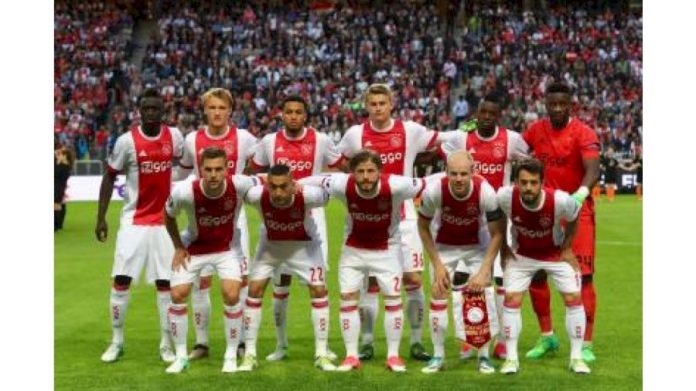 Ajax Amsterdam bounced back 3-1 against ten-men Borussia Dortmund to progress into the last 16 ahead of schedule while Paris Saint-Germain shared the spoils with resilient Leipzig at the fourth round in UEFA Champions League.

Dortmund started the encounter highly motivated and should have opened the scoring with eight minutes gone but neither Thorgan Hazard nor Jude Bellingham was able to beat Ajax goalkeeper Remko Pasveer from promising positions.

Dortmund continued to be aggressive but suffered a setback in the 29th minute when Mats Hummels received his marching orders for a foul on Antony.

Although Dortmund had to play with ten men, the hosts opened the scoring in the 37th minute after Marco Reus converted a penalty into the bottom left corner.

After the break, Dortmund kept all their men behind the ball and tried to focus on counterattacks. The host’s strategy paid off until the 72nd minute before Dusan Tadic tapped home a deflected cross at the far post to shock the BVB with the equaliser, reports Xinhua.

Ajax gained momentum and completed their comeback in the 83rd minute after Antony’s pinpoint cross allowed Sebastian Haller to head home from inside the box and gave the Dutch side a 2-1 lead.

Things went from bad to worse for the hosts in the game’s dying minutes as Antony’s square pass to the far post found Davy Klaassen, who poked home from very close to make it 3-1 on the scoreboards.

“It is always tough if you have to play for most of the time with a numerical disadvantage. We defended well though, but we conceded two similar goals following a cross. We gave everything but it wasn’t enough for a win or a draw,” Dortmund team captain Marco Reus said.

With this result, Ajax booked their berth for the next round with four wins in as many games in Group C. Dortmund slipped to third place and will face Sporting in an all-or-nothing clash.

The hosts had the last laugh though as Dominik Szoboszlai converted a penalty to clinch a last-gasp 2-2 draw.

Despite the share of the spoils, Leipzig stay in last place of Group A meanwhile PSG slumped to the 2nd spot.

Meanwhile, in Manchester, Josep Guardiola’s side recovered from a shaky first-half showing to record a comfortable home win.

Phil Foden’s early tap-in was cancelled out when John Stones deflected a clearance in off his face, and Club Brugge threatened more than once. After the break, it was all City, with Riyad Mahrez and substitute Raheem Sterling providing finishes from close range before Gabriel Jesus slid in the fourth with the last kick.

The Rossoneri’s last-16 ambitions hang by a thread after the hosts fell short of the victory they badly needed. Even a first Group B point looked a distant prospect for much of the opening half as Luis Díaz gave Porto an early lead and only Ciprian Tatarusanu prevented further damage. Milan were better after the break – though Evanilson did hit the bar – and Chancel Mbemba’s own goal earned a draw.

Inter Milan had to wait until the second half to break down a resolute Sheriff outfit and leapfrog them into the second spot.

Marcelo Brozovic opened the scoring with an effort that skipped off the surface and beyond Giorgos Athanasiadis, who was also powerless to prevent Milan Škriniar from doubling the visitors’ advantage. Alexis Sánchez scored with his third touch after coming off the bench before Sheriff earned a stoppage-time consolation through Adama Traore.

In Group C, Portuguese champions Sporting Lisbon continued their Group C revival with another emphatic win against their Turkish opponents, who are still without a point.

Paulinho passed up two fine Sporting chances in the first ten minutes before Cyle Larin drilled just wide at the other end, the cue for the home side to seize control. Pedro Gonçalves drilled in the first from the spot after being felled, and then twisted and turned to curl in a fine second. Paulinho atoned for his earlier misses with a well-taken third and Pablo Sarabia slammed in a rebound early in the second period.