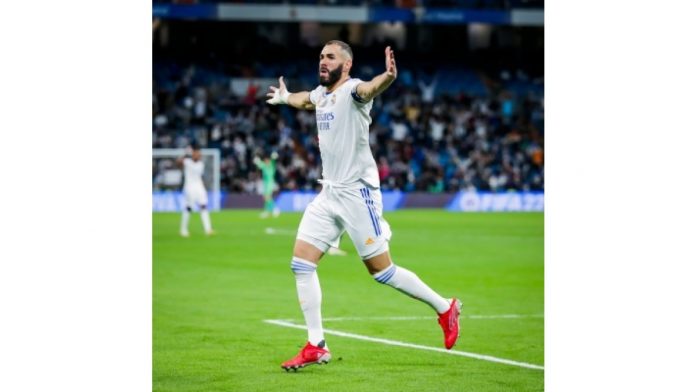 Karim Benzema scored twice as Real Madrid defeated Shakhtar Donetsk 2-1 in the Champions League to take a big step towards qualifying for the last 16 of the competition.

The win on Wednesday night leaves Real Madrid with nine points from their four group games and another win away to Sheriff Tiraspol in three weeks will book their place in the knockout stage.

Real Madrid coach Carlo Ancelotti fielded arguably his strongest side with Casemiro, Toni Kroos, and Luka Modric in midfield and Karim Benzema alongside Lucas Vazquez and Vinicius Jr in the attack.

Real Madrid won 5-0 in Ukraine a fortnight ago, but Alan Patrick gave them a warning that this would be tougher when he rattled the Real post with Thibaut Courtois beaten.

A bad mistake from the Shakhtar defense allowed the Spanish side to take the lead in the 14th minute: Marlon Santos lost the ball while trying to play out from the back and Vinicius left Benzema with a tap-in to open the score what was also his club’s 1000th goal in the European Cup.

However, after Modric went close to a second goal Real seemed to take their foot off the gas. Fernando grazed the outside of the post when he was placed to do better in the 31st minute and after the home side failed to heed the warning, he drew Shakhtar level eight minutes later after an assist from Patrick, reports Xinhua.

A mistake from Benzema, who lost the ball in midfield, allowed Patrick to again set up Fernando two minutes from the break, but Courtois was able to save with his leg.

Perhaps spurred by a half-time pep talk from Ancelotti, Real showed more urgency at the start of the second half and got their reward when Benzema netted his second of the night after the best move of the game which involved some swift passing between Casemiro, Vinicius, and the Frenchman.

Vinicius went close to making the result safe shortly afterward, but then Real again seemed to relax and Stepanenko was inches away with a powerful shot.

Luka Jovic then replaced Benzema and worryingly for his side, the striker, who is so essential to their play, looked to have suffered a groin strain, but he had done his job for the night by then.