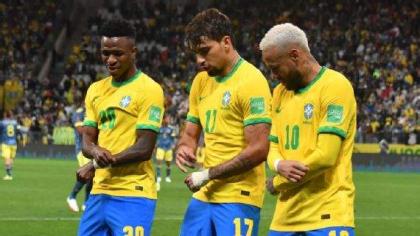 Lucas Paqueta scored late as Brazil became the first South American team to qualify for the 2022 FIFA World Cup with a 1-0 home victory over Colombia here.

It took the hosts until the 72nd minute to break the deadlock at Sao Paulo’s Itaquerao stadium, with Paqueta finishing a slick move that involved Paris Saint-Germain pair Marquinhos and Neymar.

The latter showed superb vision and skill as he used one deft touch of his left foot to turn Marquinhos’ defense-splitting pass into the path of the onrushing Paqueta.

Squeezed between two defenders, the Lyon midfielder caressed a first-time shot that touched the right glove of goalkeeper David Ospina before flying into the bottom left corner, Xinhua reports. “This is the result of all the hard work we’ve been putting in,” an emotional Paqueta told Brazil’s SporTV after the match.

“Qualifying for the World Cup was our main objective and we achieved that today.

“I’m very happy to be living this moment with the Brazilian team and I’m crying tears of joy. I hope to continue performing well for the national team.”

Despite starting the game positively, Colombia had only one shot on target and controlled just 36 per cent of possession.

Reinaldo Rueda’s men must beat Paraguay in Barranquilla on Tuesday to stay on course for a third successive World Cup berth.

Brazil’s next match is against Argentina in San Juan, also on Tuesday.