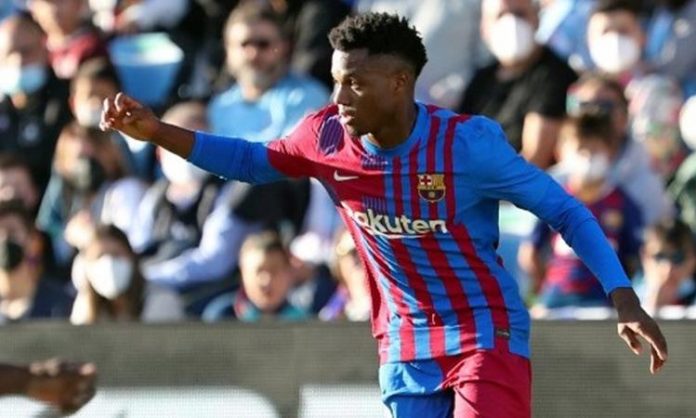 Newly-appointed Barcelona coach Xavi Hernandez was given an idea of the task that lies ahead of him as Barcelona surrendered a 3-0 lead away to Celta Vigo in a La Liga match.

Barca turned in an excellent first half display on Saturday night in Sergi Barjuan’s last game as caretaker coach and led 3-0 thanks to goals from Ansu Fati, Sergio Busquets and Memphis Depay.

However, after Ansu Fati, Eric Garcia and Nico Gonzalez were forced out through injury in the second half, Celta got back into the game thanks to Iago Aspas, who scored the first goal after an error from Ter Stegen.

Nolito headed home Celta’s second with just over 15 minutes left to play and with the five minutes of injury time completed, Aspas curled the ball into the corner of the net to leave the Barca players sprawled on the pitch in despair.

First half goals from Toni Kroos and Karim Benzema gave Real Madrid a 2-1 win at home to Real Sociedad, which sent them to the top of the table ahead of Real Sociedad’s game later on Sunday.

Radamel Falcao came on as a late substitute for Rayo and headed his side back into the game with 15 minutes remaining, but the Colombian had to limp off moments afterwards as Rayo pressed for an equaliser until the end.

Raul de Tomas’ seventh league goal of the season helped Espanyol to a 2-0 win at home to Granada. Adria Pedrosa put Espanyol ahead in the 30th minute and De Tomas showed the form he is in when he scored his side’s second 12 minutes later.

Two goals from Joselu, who scored a 76th minute penalty and a last minute header saw Alaves continue their positive run as they came back from a goal down to Levante.

Jorge de Frutos’ 13th minute strike looked as if it would give Levante their first win of the season, but Joselu broke their hearts with his side’s only two shots on target.

Salvi’s sixth minute goal gave Cadiz a surprise 1-0 win at Athletic Club Bilbao and lift them out of the relegation zone.