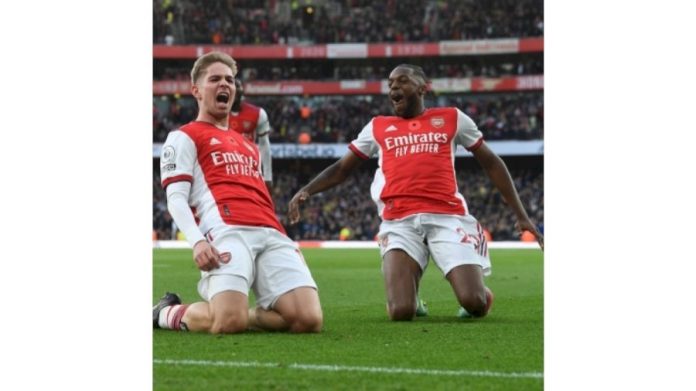 Emile Smith Rowe scored a second-half goal which proved enough to give Arsenal victory against Watford, the Gunners thus extending their unbeaten to 10 matches. the win took Arsenal to fifth position in the table with 20 points.

In manager Mikel Arteta’s 100th game in charge, Arsenal had to work hard for all three points though, after a missed penalty in the first half and disallowed goals on either side of the break.

After a minute’s silence ahead of Remembrance Sunday next week, Arsenal made a promising start at the Emirates.

Ainsley Maitland-Niles was the only change to the side that beat Leicester last weekend, replacing the injured Thomas Partey in midfield. And his clever pass to Alexandre Lacazette inside the box led to the Gunners having the ball in the net after just seven minutes, but it was ruled out by VAR.

Lacazette’s lob found Pierre-Emerick Aubameyang, from him the ball bobbled to Bukayo Saka, but replays clearly showed he was offside as he stroked home.

It was a scrappy game and there were more yellow cards than shots in the opening half hour — two apiece — and it was a foul in the area that gave the Gunners a golden opportunity to take the lead. Lacazette was taken out in the box by Danny Rose, earning Arsenal a penalty. But Aubameyang’s effort was saved by Ben Foster, who also prevented them from capitalizing on the rebound as the two teams remained locked 0-0 at half-time.

The second half started in a similar fashion, with both sides picking up more bookings before Arsenal eventually made the breakthrough.

Ben White took control, surged forward towards the area before the ball fell to Smith Rowe just outside the box. His low shot found the corner, with Watford players appealing for a foul on Moussa Sissoko.

The goal was given though, and Smith Rowe had scored for the third Premier League game running.

Arsenal had another goal disallowed, when Aubameyang sliding in on the line to get the final touch to a Martin Odegaard shot, but the flag was quickly raised. The frustration was that it appeared as though Odegaard’s shot may have gone in without Aubameyang’s touch.

Watford were not laying down and began to put the Gunners under more pressure in the closing stages. There was a real scare for Arsenal when Josh King rounded Ramsdale outside the area, found himself with an open goal but shot into the side netting.