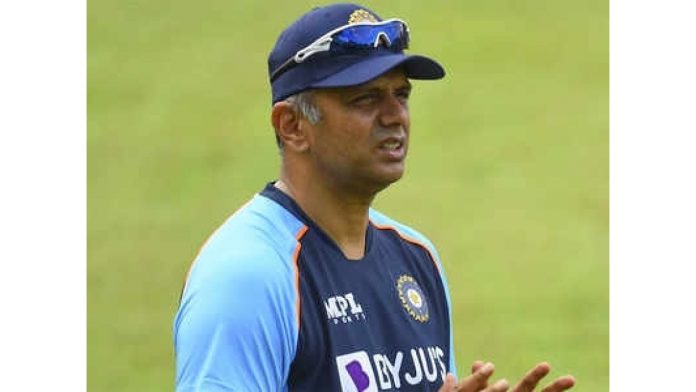 Under his stint as head coach, the 59-year old Shastri has taken Indian cricket to great heights, especially in red-ball cricket. And, BCCI has rightly appointed Dravid to take Indian cricket forward in upcoming years.

Outgoing Shastri also hailed the appointment of his replacement, saying that the experienced Dravid can set a higher bar for this ‘great team’.

“I think in Rahul Dravid they’ve got a guy I would say has inherited a great team, and with his statute and experience, he can only raise the bar for this team with time to come,” said Shastri on the last day of his assignment.

The 48-year Dravid is somebody who understands Indian cricket deeply, he knows what it takes to represent India and what’s required to be successful at the highest level. He comes with great stature but there will be pressure of expectations as well.

It’s not an easy job to be an India coach especially when everyone in the country has an opinion on everything about cricket.

Dravid has been a key member in the Indian cricketing setup in the last one decade or so. Under his coaching, India reached two Under-19 World Cup finals, losing one (to West Indies in 2016) and winning one (against Australia in 2018). Later, he also took charge as director of the National Cricket Academy (NCA) and is credited for delivering young Indian talent.

At the NCA, Dravid helped set up a process for injury management and rehabilitation, as well as training programmes for coaches across the country, and developed roadmaps for age-group, men’s and women’s cricket.

Meanwhile, Dravid’s support staff is set to be announced in due course. Paras Mhambrey, Dravid’s colleague at the NCA, is the front-runner to replace Bharat Arun as bowling coach, while Abhay Sharma and Ajay Ratra are among those who have applied for the position of fielding coach. The current batting coach Vikram Rathour has also confirmed his re-application for the position.

Dravid, who has featured in 164 Tests and 344 ODIs, will take charge for a two-year period and his stint will commence with the home series against New Zealand, which is slated to start from November 17. The team will play three T20Is and two Tests.

Things that Dravid needs to take care of in next few years:

Dravid’s immediate challenge is to oversee the Indian captaincy transition in the different formats with Virat Kohli relinquishing the leadership role in T20I cricket. It is also understood that following India’s disappointing campaign in the T20 World Cup, BCCI wants a new captain for ODIs as well.

After Virat’s departure, Rohit Sharma, IPL’s most successful captain, is likely to be elevated as India’s Twenty20 skipper. But, it remains to be seen whether he will be given the responsibility to lead India in ODIs as well or not.

It is very likely that the former Indian cricketer will have a massive say in selecting different captains for white-ball and Test cricket. And whether it’s Virat or Rohit, they will love to have clarity on leadership roles in order to avoid confusion and conflict.

With Shastri at the helm, India reached the semifinals of the 2019 Cricket World Cup and were the finalists of the inaugural ICC World Test Championship. They also twice hammered Australia in Tests in their own backyard, including a memorable series win where they came from 1-0 down after being bowled out for 36 in Adelaide to claim the series 2-1 with a victory at The Gabba.

However, Shastri’s only regret would be not to win an ICC trophy in his tenure. Also, it was the first time since the 2012 T20 World Cup, when India failed to reach the knockout stage of an ICC tournament.

The Men in Blue haven’t won a major ICC tournament ever since lifting the 2013 Champions Trophy. And many cricket experts as well as fans feel that the team’s drought to clinch a title in ICC events can come to an end during new head coach Rahul Dravid’s tenure.

“Looking forward to it (Dravid’s tenure as coach). India will have a new captain as well and I hope Rohit Sharma gets it because 5 IPL titles, what more do you want from someone? The most successful captain in the history of the IPL and hopefully he and Rahul Dravid can take Indian cricket forward.

There was a time in Indian cricket when most of the batsmen used to roll their arms in the nets and the likes of Sachin Tendulkar, Virendra Sehwag and Yuvraj Singh even used to pick crucial wickets for the team. However, in the last few years, the trend is not being continued in the Indian cricket team.

Nowadays, most of the batters are not interested in bowling and as a result the team lacks balance in the playing XI, especially in white-ball cricket.

The lack of bowling all-rounders in Team India was pretty visible in the ongoing T20 World. It became a favourite topic for debate in the country whether Hardik Pandya will be able to bowl or not and if yes then how many overs he will bowl.

With Dravid at the helm, one expects him to solve the all-rounders crisis issue by giving chance to players who are interested to bat as well as bowl. All said and done, it’s never easy to find quality all-rounders but the former batting legend is known for coming up with solutions for most of the problems.

Dravid takes over at a busy time, with India set to host New Zealand for three T20Is and two Tests. In December, India are scheduled to tour South Africa for three Tests, three ODIs and four T20Is. Upon their return, India will host West Indies, Sri Lanka and South Africa as part of the 2021-22 home season.

Thereafter, Indian players will be busy with IPL 2022, which is set to become a 10-team affair from next year.

With so much back-to-back cricket and constant living in bio-bubbles, players will require both mental and physical break. And one can imagine the rise of format-specific players in the upcoming years. Having a different set of players for different formats will give clarity to individuals on their specific roles. It will also give team management an opportunity to rotate players and avoid mental-fatigue issues.

Outgoing bowling coach Bharat Arun has also called for grooming different sets of fast bowlers for different formats going ahead, to ensure they remain fresh physically and mentally in the face of an unforgiving cricket schedule.

“Not only the volume of cricket that our country is playing, it’s also about remaining in the bubble and playing. I can guarantee you it’s not very easy to be in the bubble and keep playing throughout the year.

They do need sufficient breaks. Mental health is going to be very, very important going forward. This (cricket in bio-bubbles) is going to be the norm at least for another year or two. So it is important that we have a very good pool of fast bowlers,” Arun opined.

“There is enough talent in our country so we can afford to field different teams for different formats. That way it is not only that we understand the different talent that’s available, it also keeps our bowlers mentally and physically very. very fresh,” he added.