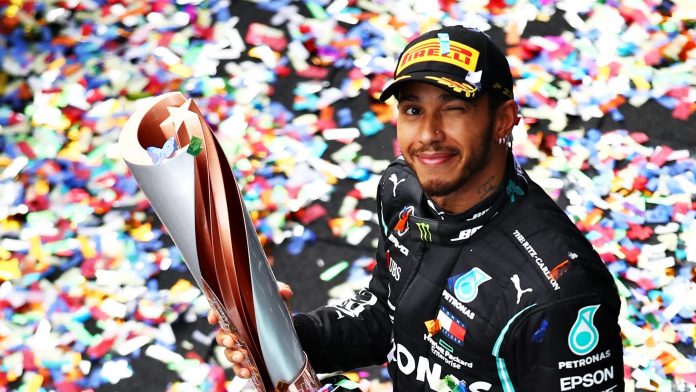 Mercedes Formula 1 driver Lewis Hamilton has said that he’ll give it everything to win in Turkey, despite starting the race in 11th position later on Sunday after copping a 10-place grid penalty for a change of engine on Friday (October 8).

The qualifying on Saturday saw Hamilton beat Valtteri Bottas to first position by over a tenth of a second, but the Briton will start 11th having taken a grid penalty for a new Mercedes engine. Instead, it’ll be his team-mate Bottas who will start first on Sunday and Hamilton will have to emulate his 2020 Turkey performance and recover from the midfield on Sunday once again.

“It really depends on what the weather we’ve got tomorrow and yes, partly cautious, but also super attacking; I need to — I want to — win the race somehow. So that’s my goal,” Hamilton said.

“I was already third at the end of Turn 1 last year, so that made a bit of a difference, but it’s a much, much different weekend, a much different track grip… so my eyes are still solely set on winning the race; it’s going to be very hard from 11th, but not impossible. So… just making sure we’ll deliver maximum attack tomorrow,” he added to Sky Sports F1.

As for Bottas, who lost time in the final sector in his Q3 flying lap, the Finn was asked whether he was told to slow down to allow Hamilton to take the pole position, therefore dampening the effect of his team-mate’s 10-place grid penalty. The Finn categorically denied it.

“No, I wasn’t asked to slow down and I was definitely going for it,” he said. “I started to struggle a bit with the front end in the last sector, so just had some understeer in Turn 12 and 14 so I could feel that I was losing a bit of time. Probably used the tyres a bit more earlier in the lap (sic). So I was fully going for it, for sure.”

The Finn would be eyeing his first win of 2021 later on Sunday, having last taken victory back at the 2020 Russian Grand Prix — while his last pole position came in Portugal, according to formula1.com.

Asked how motivated he was, Bottas said, “Very motivated. You know, I haven’t won this season yet, so it’s a big, big motivation for me and yes, but I need to focus on certain things in the race step-by-step and keep the focus, and hope for the best.”

Mercedes could extend their 33-point constructors’ championship lead over Red Bull on Sunday –while Hamilton has the uphill task of working up through the field from 11th if he is to consolidate his two-point advantage over Red Bull’s Max Verstappen.