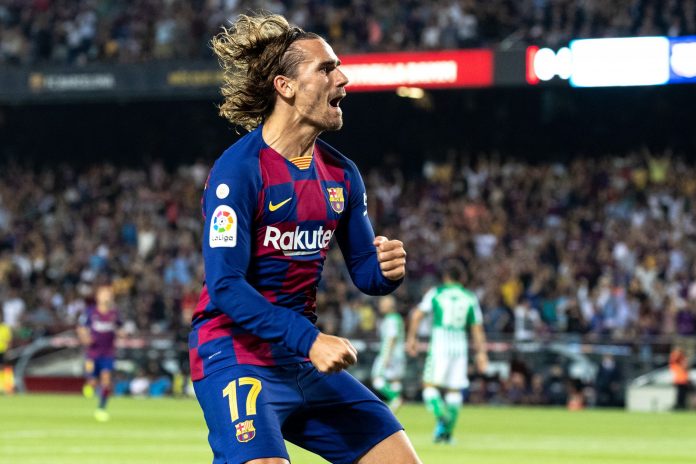 Atletico Madrid striker Antoine Griezmann had a night he is unlikely to forget in a long time as his side lost 3-2 at home to Liverpool in their Uefa Champions League (UCL) tie. The Frenchman scored two goals at the Wanda Metropolitano stadium to bring his side back from 2-0 down, but then saw a red card that played a big part in their loss.

Griezmann probably didn’t have malice in mind when he challenged for the ball with Liverpool striker Roberto Firmino early in the second half, but his high foot in the Brazilian’s face left the referee with little option other than to send him off, in what was the decisive moment in an exciting game.

The game was only eight minutes old when Mohamed Salah put Liverpool ahead after cutting in from the right, dipping his shoulder and firing in a left-foot shot that took a touch off Geoffrey Kondogbia before finding the net late on Tuesday night.

It was 2-0 just five minutes later when Naby Keita latched onto Felipe’s poor clearance to volley past Jan Oblak in the Atletico goal to seemingly put Liverpool on track to a comfortable win, Xinhua reports. That changed in the 20th minute when Griezmann put the finishing touch to a move that started with Thomas Lemar, before Koke sent a low ball into the Liverpool area for the Frenchman to prod home from close range.

Alisson did well to save from Griezmann shortly afterwards when he was clean through on goal, but the Liverpool keeper’s save merely delayed the equaliser and Griezmann made it 2-2 with a crisp shot in the 34th minute after excellent work from Joao Tomas gave him space to finish.

Alisson saved magnificently from Yannick Carrasco immediately after the break, before Griezmann left his side with 10 men after his rush of blood.

Atletico tried to break up the play as much as possible after the ending off with a series of niggling fouls and constant appeals for free kicks, but Liverpool got a breakthrough with 12 minutes left. Mario Hermoso committed a needless shove on Diogo Jota and Salah beat Oblak from the penalty spot.

Atletico made a quadruple substitution with 10 minutes left to play and thought they had a penalty of their own after Jose Gimenez went down under a challenge from Jota, but the referee overturned his original decision after a VAR check and Liverpool claimed an important win.

In Amsterdam, Ajax crushed Borussia Dortmund 4-0 to take the lead in the Champions League Group C with three wins in as many matches.

In a sold-out Johan Cruijff Arena, Ajax took the lead through an own goal by Dortmund captain Marco Reus, who deflected Dusan Tadic’s free-kick into the ned.

After Daley Blind doubled the scoring, Ajax continued to dominate the German side and kept on creating chances.

Erling Haaland had the first opportunity for Dortmund on the stroke of half-time, and thought he had scored just after the break, but Ajax goalkeeper Remko Pasveer and the crossbar saved Ajax.

Brazilian winger Antony made it 3-0 for Ajax on 57 minutes and Sebastien Haller headed in his sixth goal in three Champions League matches in the 72nd minute.

Ajax could have scored even more, but the 4-0 victory sees the Amsterdam side record their biggest European win against a German side since 1973 when they beat Bayern Munich by the same scoreline, while Dortmund suffered their biggest ever Champions League defeat.

Ajax now lead Group C with nine points, ahead of Dortmund on six points, Sporting CP with three points and Besiktas with zero.