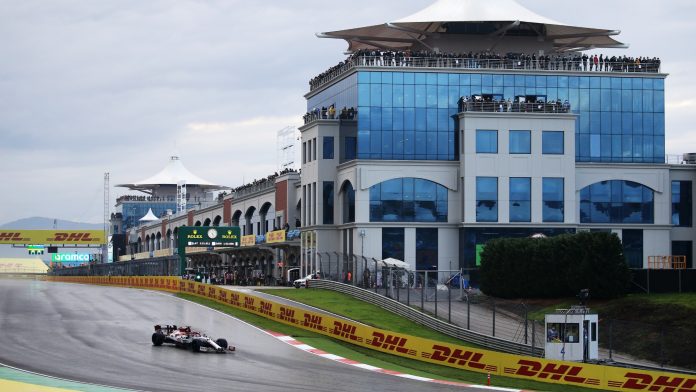 Mercedes driver Lewis Hamilton qualified fastest for the Turkish Grand Prix but will start the race in 11th position after copping a 10-place grid penalty for a change of engine, meaning Valtteri Bottas, who was the second-fastest in Saturday’s qualifying, will start on pole position on Sunday ahead of Red Bull’s Max Verstappen.

In Q1, Hamilton took the top spot by just 0.007s ahead of Max Verstappen. Q2 saw him repeat the feat, and he delivered again in the final session with an ultimate effort of 1m22.868s – a new track record at Istanbul Park.

Bottas was 0.130s off in the second position, which will be pole when Hamilton’s engine penalty demotes him to P11 – while Verstappen was 0.328s off top spot in third.

Charles Leclerc will be fourth on the grid for Ferrari ahead of Pierre Gasly, the AlphaTauri driver within half a second of the pole, according to a report’on F1’s official website.

Fernando Alonso unqualified Red Bull’s Sergio Perez, and the Alpine driver will have a tough task to keep not only the P7 qualifier behind him but also Lando Norris of McLaren (P8) away too. Lance Stroll of Aston Martin and AlphaTauri’s Yuki Tsunoda rounded out the top 10.

Mick Schumacher made it to Q2 for Haas for only the second time. He qualified a career-best 14th behin’ Williams’ George Russell, whose Q3 hopes were dashed with a late problem at the final corner in Q2. McLaren’s Daniel Ricciardo was a shock elimination from Q1 in P16 having set his fastest lap before the track settled in.

Qualifying 15th was Ferrari’s Carlos Sainz, but penalties for his new engine mean the Spaniard will start last alongside Nikita Mazepin of Haas.