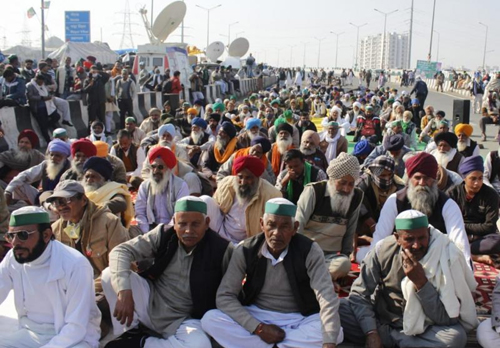 Rummaging through recent horrible incidents that happened in the name of protests has unmistakably proved that Farmers protest is infact a political campaign indirectly working for political parties which have been kicked out of power by the mighty Bjp. Since, All parties quiver like a gasping fish out of water which is simply lured by a bait, when they aren’t in power for a couple of years, and if a party like congress which has been relishing parliamentary hospitality and revelries since independence, was kicked out twice by Bjp. Therefore, their frustration and wrath in the name of politics is inevitable. History is apparently an evidence of Congress’s sordid character when it’s not ruling the Prime ministerial throne of power.

Congress is pernicious because this party is brilliant at encumbering the ruling party from doing anything for the country which has been seen in seven years of Modi regime. Since 2014, new peculiar culture has been thriving in India, which is verily detrimental for the society. It is about protesting vehemently against everything done by the ruling party even if it sounds risible and inane. Such ridiculous and malicious protests have happened in India after 2014, such as CAA protests, and now farmers protest.

CAA has evidently nothing to do with Indian Muslims, however, the lies disseminated by congress party with the help of its loyal lipspittles in media who have been serving this political party for decades, and savoring the alms with delight, were sufficient to create a ruckus in the country, and a conspiracy against Hindus was concocted and the Delhi riots have shown what political parties like Aam Aadmi party and congress tend to do in order to topple the govt which is a dangerous force for their existence.

After getting bashed in general elections 2019, Congress party started to wobble. To protect its crumbling pillars, It has fervently pandered farmers to protest against farm bills which are certainly for the betterment of farmers in India, because Congress couldn’t digest this decision of the govt, as gobbling up farmers money with old, feckless laws is the only source of income of this party leaders and workers now.

Farmers protest has been planted brilliantly that even the govt had to implore for the settlement to the so-called farmers who are unbelievably obsessed with effrontery, duress and profanity. It was extremely lionized by Indian media, making it evolve like a giant which contained even anti India elements like Khalistan dreamers. The media has ceaselessly highlighted this protest, labelling it as the biggest protest against the govt in the world, the congress friendly journalists and Islamists spread this as if the govt was about to slay farmers and loot their lands like Islamic invaders. Although all these lies were apparently hollow, yet this protest prospered on the highways, blocking the national capital.

This well funded protest has slyly become an arena for activism, resurrecting political careers of leaders like Yogendra Yadav  and Rakesh Tikait. They are relishing sumptuous dishes in the air conditioned tents sojourned at the Delhi borders, having media rambling around them, and staying in ritzy resorts for continuing this protest. Ironically, it is a farmer protest in which no real farmers exist. Threatening the govt, ministers, journalists who question their credibility and demand answers about farm bills, is happening everyday in this protest which  led the unfortunate incident happened on Republic day. India has witnessed how tractors were roaming to crush police and people to create a bloodbath, how fearlessly  anti national elements hoisted khalistani flags in the tractor march, how brutally these so-called farmers attacked and belabored police men at Red fort. Everything is still alive in our minds. The punishment is yet be served to the criminals.

This is the prevalent history of Congress, when it fails to snatch power, it purposely utilizes its personal power to create a havoc in the country in order to topple the govt, spreading lies about everything, and continuously making it a big headline with its friendly journalists and denigrating India internationally. The fervor which we can notice in chaos created by congress, is unbelievable. Congress has a penchant for disparaging India in order to make it look like that it’s only Congress that knows how to rule. In its claws, media, liberal lobbies and all are caged, which is too easy to notice how its friendly media has been toiling to blame Bjp for Lakhimpur  kheri incident, whitewashing the killings of bjp workers who were mercilessly murdered by these protesters or terrorists.

The khalistani proponent Bhindranwale who was excellently eliminated by Late Indira Gandhi, is still in the hearts of protesters that we have seen in the pictures of lakhimpur kheri incident. Men wore T-shirts of Bhindranwale emblazoned on them. However, nobody has the right to call it anti national, Otherwise Punjabi singers lolling on their cozy couches in Canada will feel uneasy and start tweeting and abusing while serving their masters there.

Farmers protest is just a façade under which vile activities are happening unabated. To disrupt the harmony, and enhance the chances of Congress and other inept leaders to try their luck in upcoming UP elections, the name of farmers is being cunningly used to avoid any kind of suspicion and actions for their unconstitutional demeanor shown on Republic day, and in Lakhimpur kheri. Rakesh tikait is very clement when it comes to protesting against other ruling parties where congress is in power, or in alliance with the ruling party. His obsession is either fixated only on Bjp, or it’s the only purpose behind his presence in this protest. it certainly elucidates what is really not coherent.

The protesters behave barbarically as if they are fighting for something else, their attacks on bjp workers have explained their ugly intentions which media is not even talking about. Under the garb of farmers protest, such dangerous elements are continually thriving, which is unfortunately an alarming situation for the govt.

Congress is a master of violence, ruckus and chaos. The unbridled lust for power has impaired this party’s credibility. This party yearns for power so badly that it can even fuel the fire of religious riots to clinch power again, using all the bloodbath and miseries, which its leaders are currently doing for lakhimpur kheri incidence.

All the political vultures are trying to sneak into the city, and light up violence to create a chaos in the state which might be beneficial for the party in upcoming elections in 2022. This protest is not a farmers protest against farm bills, because there is not even anything wrong in those bills, it has only one purpose that is to win elections anyhow. And use this protest in all elections against bjp only. It is just a political campaign which might end if Congress’s incapable leadership of Rahul Gandhi drastically loses the UP elections drastically.

The Kisan union leader Rakesh tikait who is currently seen strutting like he is a political savvy in Indian politics, or any famous leader and, speaking audaciously like he has grabbed the highest post, is ridiculously a man who couldn’t win even a single election in his life, he is just being mollycoddled by Congress party for its own purposes. Threats and whitewashing of violence is shamelessly embedded in his tongue which is infact expected from a profligate leader domesticated by Congress party.

This protest has ceaselessly exposing its ugly purposes, as leaders who are flaunting their audacity, are continuously attempting to create an disturbing atmosphere to affect upcoming elections. They are secretly conspiring against the famous bjp stalwarts, conniving with anti-India and anti – Hindu elements which has apparently been shown in recent violent protests by disguised farmers who are obsessed with duress and smitten with arson. Behind them, are standing their sympathizers with pens, some are sitting in the courts to fight for them, and due to unexpected unemployment issues, some are active on social media to whitewash all the violence with a pretext, that these protesters are farmers who are unabashedly killing people, setting vehicles on fire, and disrupting harmony in the country. No leader talks about farm bills now, all they say is, don’t vote for bjp. Hence, This clearly articulates what this farmers protest was born for; Defeat Bjp.