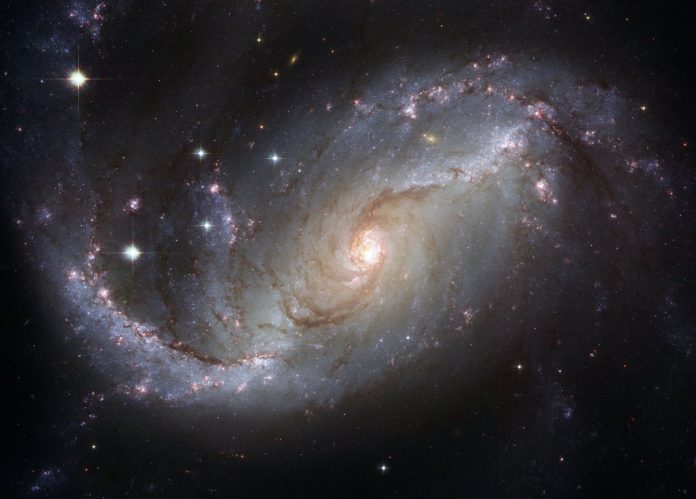 In general relativity, a white hole is a hypothetical region of spacetime and singularity that cannot be entered from the outside, although energy-matter, light and information can escape from it. In this sense, it is the reverse of a black hole, which can be entered only from the outside and from which energy-matter, light and information cannot escape. White holes appear in the theory of eternal black holes. In addition to a black hole region in the future, such a solution of the Einstein field equations has a white hole region in its past.

This region does not exist for black holes that have formed through gravitational collapse, however, nor are there any observed physical processes through which a white hole could be formed.

Like black holes, white holes have properties like mass, charge, and angular momentum. They attract matter like any other mass, but objects falling towards a white hole would never actually reach the white hole’s event horizon (though in the case of the maximally extended Schwarzschild solution, discussed below, the white hole event horizon in the past becomes a black hole event horizon in the future, so any object falling towards it will eventually reach the black hole horizon). Imagine a gravitational field, without a surface. Acceleration due to gravity is the greatest on the surface of any body. But since black holes lack a surface, acceleration due to gravity increases exponentially, but never reaches a final value as there is no considered surface in a singularity.

Hawking’s semi-classical argument is reproduced in a quantum mechanical AdS/CFT treatment, where a black hole in anti-de Sitter space is described by a thermal gas in a gauge theory, whose time reversal is the same as itself.

The possibility of the existence of white holes was put forward by Russian cosmologist Igor Novikov in 1964. White holes are predicted as part of a solution to the Einstein field equations known as the maximally extended version of the Schwarzschild metric describing an eternal black hole with no charge and no rotation. Here, “maximally extended” refers to the idea that the spacetime should not have any “edges”: for any possible trajectory of a free-falling particle (following a geodesic) in the spacetime, it should be possible to continue this path arbitrarily far into the particle’s future, unless the trajectory hits a gravitational singularity like the one at the center of the black hole’s interior. In order to satisfy this requirement, it turns out that in addition to the black hole interior region that particles enter when they fall through the event horizon from the outside, there must be a separate white hole interior region, which allows us to extrapolate the trajectories of particles that an outside observer sees rising up away from the event horizon.

Just as there are two separate interior regions of the maximally extended spacetime, there are also two separate exterior regions, sometimes called two different “universes”, with the second universe allowing us to extrapolate some possible particle trajectories in the two interior regions. This means that the interior black-hole region can contain a mix of particles that fell in from either universe (and thus an observer who fell in from one universe might be able to see light that fell in from the other one), and likewise particles from the interior white-hole region can escape into either universe. All four regions can be seen in a spacetime diagram that uses Kruskal–Szekeres coordinates.

In this spacetime, it is possible to come up with coordinate systems such that if you pick a hypersurface of constant time (a set of points that all have the same time coordinate, such that every point on the surface has a space-like separation, giving what is called a ‘space-like surface’) and draw an “embedding diagram” depicting the curvature of space at that time, the embedding diagram will look like a tube connecting the two exterior regions, known as an “Einstein-Rosen bridge” or Schwarzschild wormhole.

Note that the maximally extended Schwarzschild metric describes an idealized black hole/white hole that exists eternally from the perspective of external observers; a more realistic black hole that forms at some particular time from a collapsing star would require a different metric. When the infalling stellar matter is added to a diagram of a black hole’s history, it removes the part of the diagram corresponding to the white hole interior region.

Despite the fact that such objects are permitted theoretically, they are not taken as seriously as black holes by physicists, since there would be no processes that would naturally lead to their formation; they could exist only if they were built into the initial conditions of the Big Bang.

Additionally, it is predicted that such a white hole would be highly “unstable” in the sense that if any small amount of matter fell towards the horizon from the outside, this would prevent the white hole’s explosion as seen by distant observers, with the matter emitted from the singularity never able to escape the white hole’s gravitational radius