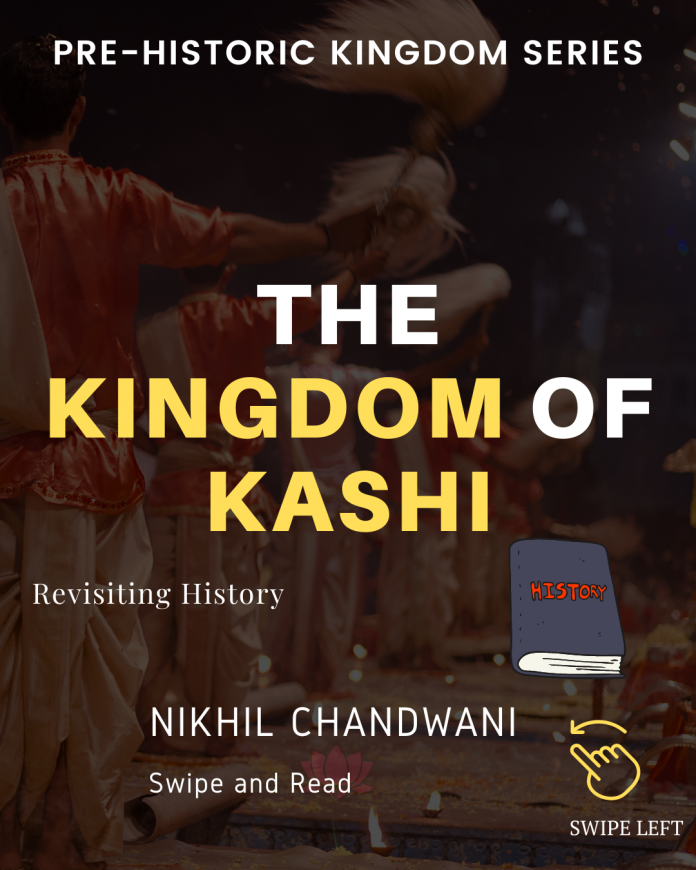 The Kingdom of Kashi was an ancient Indian kingdom located in the region around its capital Varanasi, the latter bounded by the Varuna and Asi rivers in the north and south and named after them. It has existed since the time of Ramayana and Mahabharata. Its easternmost border was the legendary Son River, which was also the western border of Magadh. It would have covered much of the area of Eastern UP centered around today’s Varanasi and the present southwestern part of Bihar that was Arrah district. Today this area comprises Rohtas, Buxar, and Kaimur districts.

The Kingdom of Kashi was one of the 16 Mahājanapadas.

The Mahājanapadas (Sanskrit: great realm, from maha, “great,” and janapada “foothold of a people”) were sixteen kingdoms that existed in ancient India. Mahājanapadas were mentioned in Ramayana, Mahabharata, Puranas and were heavily mentioned in Buddhist and Jaina texts. This means the Kingdom of Kashi existed at least 9000 years ago. Sumitra, one of the wives of Dasaratha and mother to Lakshmana and Shatrugna, was from the Kashi kingdom.

Kasi was ruled by an Asura named Kshemaka, who Panchala prince Dividosa defeated. Dividosa then became the king of Kashi. The successive rulers were Haryasva and Sudeva. Kashi was later governed by Kuru kings. This was the great Vedic Age where Bhagwan Shiva was worshipped. People since those days have believed that this is the place where one can attain liberation from the Life and Death Maya (trap). For over 3000 years, people have considered that it is here that Bhagwan Shiva gives the Tarak Mantra to the ones who are about to die.

This is a part of the Pre-historic kingdoms series.

Prosperity and opulence were everywhere in the Kashi Kingdom. It was the center of Vedic and education par excellence. In the Rigveda, an ancient Indian sacred collection of Vedic Sanskrit hymns, the city is referred to as Kāśī (काशी: Kashi) from the Sanskrit verbal root kaś- “to shine”, making Varanasi known as “City of Light”, the “luminous city as an eminent seat of learning.” It was widely known for its military prowess. It is still regarded as one of seven holy cities (Sapta Puri) which can provide Moksha, Ayodhya, Mathura, Haridwar, Kashi, Kanchi, Avanti, and Dvārakā are the seven cities known as the givers of liberation. No wonder Kashi is considered one of the world’s oldest continuously inhabited regions.

“Benares is older than history, older than tradition, older even than legend, and looks twice as old as all of them put together.”