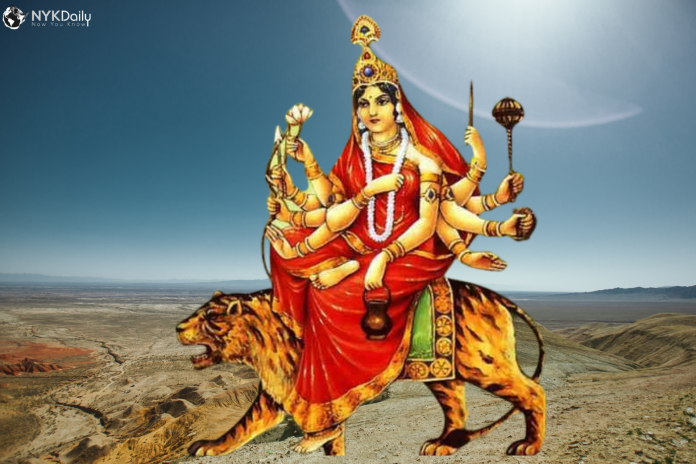 The festival of Navratri is a time for self-referral, a time for getting back to the source. The seekers fast, pray, maintain silence and meditate this time of the year. It gives us relief at three levels of our existence — physical, subtle and causal. While fasting detoxifies the body, silence purifies the speech and brings rest to the chattering mind, and meditation takes one deep into one’s own being.

We see Devi being worshipped in 9 forms during Navratri. Recognizing the one divinity in every form and name is what Navratri is all about.

Gurudev Sri Sri Ravi Shankar from Art of Living elucidates for us the pristine nine forms of Maa.

Shailaputri is the daughter of the peak (Shaila). The common interpretation is that she is the daughter of Mount Kailasa, but this is a gross understanding.  On the path of Yoga, it means the highest level of consciousness. When the energy is at its peak, only then can you notice and recognize it. Only then can you experience the pure consciousness – the Devi. Here the peak refers to the peak of any intense feeling. When you are 100% with a feeling, and it consumes your entire being, then Goddess Durga is really born. Just like children, who get angry 100% and then they are out of it in only a few minutes.

She is that aspect of our consciousness that is pure, unblemished, and virgin. She is the aspect of Mother Divine that permeates the entire brahmand (the universe.) She is the energy that dwells in Brahman, which moves us towards Brahman.

She sports a moon and a bell. It is said that the beauty of a million moons is present in our own consciousness. And that uplifting consciousness, which holds and exhibits the beauty, is Chandraghanta. Do you know what happens when a bell is rung? Consciousness gets filled with that sound. All other thoughts and worries dissolve in the sound. You get into a blissful state.

She is a form of Devi who is a ball of energy. Whenever you experience a ball of energy within you, know that it is an aspect of Durga. Kushmanda also refers to pumpkin. This is because it is said to have the most prana among vegetables.

Skandmata represents proud motherhood. Skanda is a commander-in-chief.  The pride of a mother of a soldier is very different. Usually, motherhood comes with concerns for others but the Mother of Skanda has no worries because she knows her son will protect the planet.  So the love with confidence and pride in the quality of Skandamata.

There lived a sage. He had no desires as such. But when he was praying to the Mother Divine, she appeared and asked, “What do you want?” And he said, “I want you to be my daughter and have my surname.” So Katyayeni is mother divine assuming the surname of the devotee. Katyayeni is that power of Mother Divine who bestows all wishes and that consciousness that assumes your identity as its own, taking away all your limited identities.

Devi Kalaratri is a fierce form of Devi. Kalaratri represents the dark night or dark energy. The night is also considered an aspect of Mother Divine as it is the night that brings solace, rest and comfort to our souls when we get a glimpse of infinity in the skies.

She is the beautiful and serene form of Durga, who gives momentum and freedom in life.

Siddhidhatri is a giver of perfection.  A sense of achieving perfection or lack of it solidifies your ego, reflecting limited existence. When you feel you don’t have perfection, then you believe that Mother Divine is going to give it to you. Then, you come out of that lack. If you think you have attained some things in life by your own efforts, here again you realize Mother has gifted this to you. Just realizing this, you become one with the pure nature of the Self, consciousness of Mother Divine. So realizing perfection is not by our doing, but it is being bestowed to you is what Siddhidatri is about.

Though Navratri is celebrated as the victory of good over evil, from the Vedantic point of view, the victory is of the absolute reality over the apparent duality.