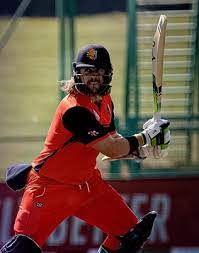 Myburgh and O’Dowd welcomed David Wiese with a couple of fours in the second over. O’Dowd, carrying his good form from the first game, pulled a short ball from Ruben Trumpelmann for six and then charged down the pitch for a lofted four down the ground.

The opening pair added 42 runs before Jan Frylinck gave Namibia the first breakthrough by getting rid of Stephan Myburgh (17) in the final over of the powerplay.

Roelof van der Merwe, who was promoted to get some quick runs, showed his intent with a reverse-swept four. However, he was caught in the deep without adding much more, giving Wiese his first wicket. Namibia bowled with discipline and managed to slow down the scoring, keeping their opponents to 69/2 at the halfway mark.

From there on, O’Dowd did well to find the gaps and keep the scoreboard ticking. He targeted the shorter boundary on the off-side with a lofted shot to bring up his fifty with a four. He went on to make 70 off 56 balls, run out in the final over while going for the second.

However, it wasn’t easy for other batters to get the big hits, given the large boundaries of the ground. Colin Ackermann, who himself was kept in check by a series of wide yorkers, took 30 balls to hit the first six.

Scott Edwards came in at the death and struck three boundaries to make a quick 21* off just 11 and took Netherlands to 164-4 in 20 overs.