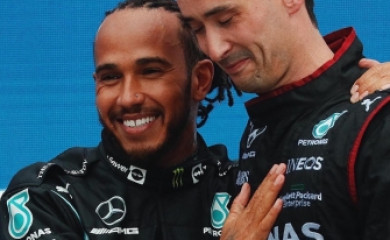 Seven-time Formula 1 world champion Lewis Hamilton, who came agonisingly close to catching race winner Max Verstappen in the final few laps of the United States Grand Prix late on Sunday but couldn’t stop the Dutchman from winning the race, conceded that Red Bull was “simply too fast for the day”.

Red Bull’s Verstappen extended his lead in the 2021 Formula One World Championship by holding off Hamilton in yet another captivating duel between the title contenders.

After starting second on the grid, Hamilton grabbed the lead from title rival Verstappen off the line into Turn 1. But the Dutchman retook the lead after the pitstops had played out, leaving Hamilton to chase down the Red Bull as the laps ticked down towards the chequered flag.

Hamilton eventually finished just 1.333 seconds behind Verstappen, slipping to 12 points behind him in the championship.

“We gave it everything we had, and they were just quicker than us this weekend, for whatever reason,” he said after the race. “I can’t pinpoint it. It looked like they had just a better rear end, a little bit less sliding than we had,” said Hamilton to formula1.com.

What began as a race Hamilton seemed destined to win after his electric start, the Briton leading more laps than in the previous nine races combined, the defending champion ended up seeing his hopes deflate thanks to Red Bull’s superior pace.

“Yes, a great start, and the goal was to get in the lead. Finally got a good start — I have not had as good a start in a long time — and I was really happy with it,” said Hamilton, adding, “and it was just about staying clean and coming out ahead and holding onto it. It felt good at the time to get into the lead; I thought: ‘This is step one’, and as I said, they were just too quick.”

Looking forward to the next races in Mexico and Brazil, Hamilton said Mercedes may well be on the back foot compared to Red Bull — which could make for a tough brace of Grands Prix.

“I don’t know what we could have done differently (on Sunday). I’ll have to sit down and talk with the team afterwards — I think the team did a great job and it was the best… we had. We go into at least the next two tracks, which are very strong circuits for Red Bull, so that’s going to be tough, for sure,” said Hamilton.