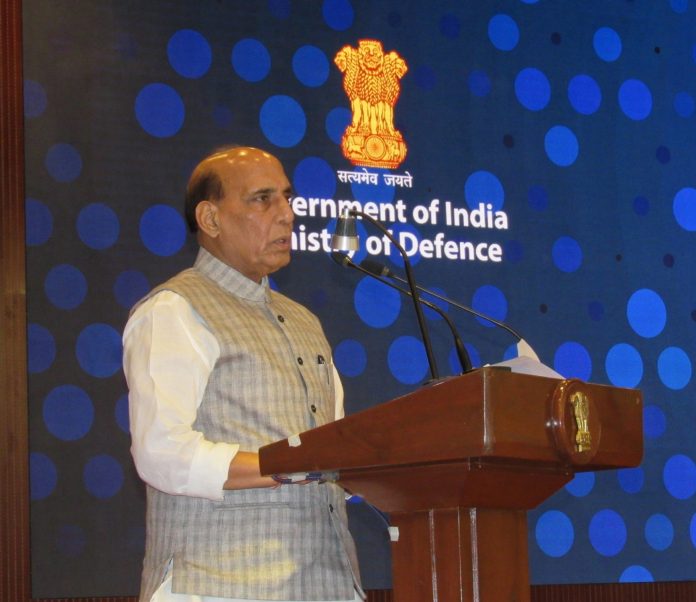 India’s defence exports have grown by 334 per cent in the last five years and the country is exporting to more than 75 countries, Defence Minister Rajnath Singh said on Monday.

During his address to the Ambassadors’ Round Table Conference over DefExpo 2022, Singh said that India’s export performance is a strong indicator of the quality and competitiveness of defence products.

DefExpo 2022 is planned at Gandhinagar in Gujarat from March 10 to March 13.

He said that the Indian Government is committed to support the growth of defence modernisation and capabilities and have increased the defence capital outlay in the annual budget of 2021-22 by 18.75 per cent from the preceding year.

“This is the highest ever increase in the last 15 years,” said Singh.

Speaking to the Ambassadors, he said that today’s world is fast moving towards becoming one composite and integrated whole, where mutual goals and interests are converging increasingly.

The growth of a global economy with backward and forward linkages among the countries is not only irreversible, it is also a dominant force leading us to an ever interconnected world, the minister pointed out.

It is in this context mutual give and take of ideas on such fora leads to strengthening of bonds and better understanding of each other’s interests, as also identify potential collaborations and joint efforts.

Rajnath Singh then talked about how the world churning in the year 2020 and 2021 has seen the discovery of new horizons in the Aerospace and Defence manufacturing sectors, including space, cyberspace, futuristic capabilities and disruptive technologies such as Artificial Intelligence, Block-chain, Augmented and others.

The minister stressed upon that the Indian Aerospace and Defence manufacturing sector today is ready to soar to newer heights.

He then recalled about the Ambassadors’ Round-Table held two years ago on October 7, 2019 at Maharashtra Sadan for the previous edition of DefExpo-2020 — which was held at Lucknow from February 5 to February 9, 2020.

“DefExpo-2022 aims to further the benchmark of its previous edition with greater presence of exhibitors, foreign and Indian OEMs, other countries and we are committed to supporting the partnerships that have been forged thus far as also form newer bonds for mutual growth,” the minister said.

He said that the exhibition will bring all the latest technologies under one roof and provide a myriad of opportunities to the stakeholders in the Aerospace and Defence industry.

The minister said that Defence Expo-2022 is going to provide an overview of what India has been able to achieve in terms of defence R&D and production, “application of modern technologies, liberalised collaborative policies that we have introduced in a short period of five to seven years”.

He assured the Ambassadors that Gujarat has such richness of culture, art, food and serenity to offer that DefExpo-2022 will leave a lasting imprint on the participating delegates.