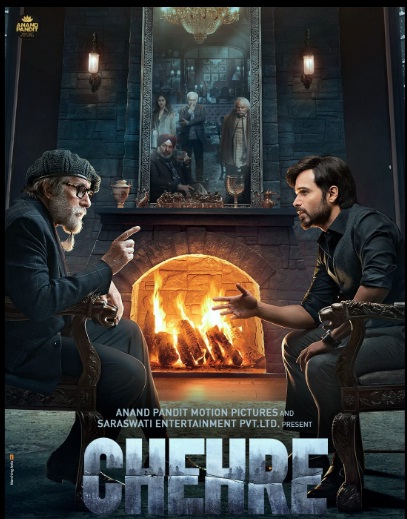 In a heritage mansion at an isolated hill station, four former court officials meet again after years apart for a luncheon. One of the men is a former public prosecutor. It happens to be their preferred pastime to recreate mock trials on strangers who seek refuge in their spooky house. At first, it seems like a fun game but then it gets serious.

Sameer Mehra (Emraan Hashmi), the head of an ad agency based in Delhi, runs into the four gentlemen after spending the night there due to extreme weather. During the weekend, he meets veteran attorneys who are willing to host him. Amit Baba, Annu Kapoor, Dhritiman Chatterjee, and Raghubir Yadav are the prosecutors, the defense lawyers, the judge, and the executioner, respectively. Identified as Anna, the mansion’s mysterious housekeeper-painter, she is a Godlike figure with an unblinking gaze and a creepy laugh.

Following a short drinking session and a few small talks, Sameer decides to join the veterans’ club and contribute to their courtroom game. As amusing as it might seem, it soon becomes an accusation that he murdered his boss and took his position. Throughout the story, the unfolding of Sameer’s case is revealed. Does he stand trial or is he acquitted?

The script lets down the actors like Rumy Jafry but he has some good moments at his disposal. It is no exception for Emraan Hashmi despite his immense talent to be wasted. Neither he nor Mr. Bachchan can salvage the languid mystery, rather they contribute to its strangeness by giving it a certain gravitas.

Despite her decent role, Rhea Chakraborty fails to impress. On paper, the story might have appeared unorthodox at first but as it develops, it slowly turns into something absurd.

It’s almost impossible to evaluate criminals without getting caught but only those who get caught are labeled as such. This notion goes off course in the execution. A gripping trial drama can make some plot gaps inconsequential. It is more of a rant of people citing Sameer’s example as a failure of justice. The ‘game’ seems pointless and he seems more like a scapegoat given the circumstances.

Something is uninspiring about four self-proclaimed guardians of justice perpetually talking about ‘tareekh pe tareekh’; Sameer’s deceptive background doesn’t quite satisfy either. It is also problematic that the protagonist does not find their odd game and his old company familiar. There are ‘apradhis’ all around that house. This alone seems impossible. Despite the film’s slow start, one can hope that the second half is more dynamic as well. A tragic climax only deteriorates things further. It is a grey area to judge the prosecutor’s analytical skills. Much is left unsaid by Ranjit Kapoor’s writings.

The atmosphere fits the story like an absolute glove. Its righteous demeanour, combined with a preachy tone, softens the force. Its own pace and lack of reasoning limit the film’s potential for being viewed as a thriller. We think that whether Sameer is guilty of killing or not, the film is death by exhaustion.

I would like to give this movie a 3/5 rating. Chehre’s script is writing a reflection on the current situation of criminal justice in India. At first glance, the idea seems interesting but the fascination ends there. This film ends up feeling like the longest-running lawsuit ever; it’s a ridiculous courtroom drama.