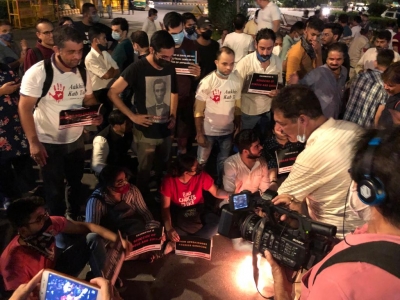 Scores of Kashmiri Pandits staged a demonstration at the Jantar Mantar here on Saturday demanding security for the minority community in Jammu and Kashmir in the light of the recent targeted killings of civilians by terrorists in Srinagar.

“We demand security for the Kashmiri Pandits in Jammu and Kashmir. A few of us on behalf of the community will also submit a memorandum to Home Minister Amit Shah on this,” a person named Rakesh (40) told IANS.

In what is being called selective and systematic killings, three Hindus and one Sikh teacher were gunned down by terrorists in Srinagar recently. Warnings were also issued against a few others. The killings created panic amongst the community members, due to which many people have reportedly fled Srinagar, drawing a comparison with the exodus of 1990.

“The killings are not new in Kashmir. Such incidents have occured earlier as well. These terrorists enter universities and forcefully check everyone’s identity card. Those who are found to be non-Muslims are either taken away or killed,” another person who took part in the demonstration said on condition of anonymity.

A demonstrator named Aarti, a housewife who had fled from Kashmir in the 90s, questioned the BJP, saying, “In the past the party had assured the Kashmiri Pandits that it will fight for justice for us. But none of us have seen anything happening on the ground.”

The demonstrators carried out a candle light vigil holding placards. They also raised slogans against Pakistan for sponsoring terrorism in the Union Territory.

“Kashmiri Pandits who had fled their homes in 1990 were promised that they will soon be able to return to their homes. How can that happen when the ones living in Jammu and Kashmir are not safe. We appeal to the government to ensure their safety first,” said Shalini Chakko, a young Kashmiri Pandit born and brought up in Delhi.