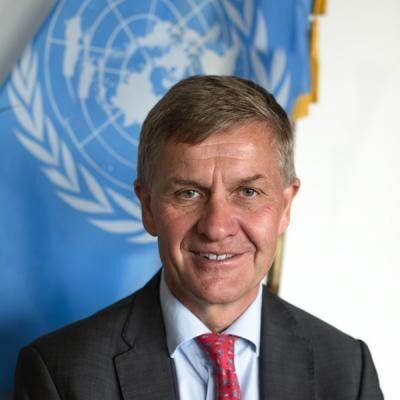 With less than a week to go for the pivotal UN Climate Change Conference (COP26) in Glasgow, where nations will submit fresh pledges to secure global net zero emissions and keep 1.5 degrees within reach, former UN Environment chief Erik Solheim on Monday hoped India would find all win-win policies at the summit that are good for economic development and creating green jobs.

In an exclusive interview here, Solheim said, “We hope India finds all the win-win policies that are good for economic development and jobs while also protecting Mother Earth.”

“An urgent shift from coal to renewables will create jobs and prosperity and protect against climate disaster. Green tourism, green agriculture and electric mobility are other examples.”

Last week the visiting Solheim participated in the launch of electric buses in Mumbai.

“The city (Mumbai) will soon transit to a future where all buses are electric and with an extensive metro system. In Andhra Pradesh they move fast into zero emission farming which produces greater yields. Telangana goes big on tree planting and urban parks. There are many great examples,” he added.

The former Norwegian diplomat, politician and environment minister played a crucial role in 2018 as the United Nations Environment Programme Executive Director in convincing India to phase out single-use plastics by 2022, a major achievement in his crusade against plastic pollution.

On his expectations from the outcome of the upcoming COP26 that is being held under the Presidency of Britain, Solheim said, “We should expect some new and more ambitious commitments from national leaders.

“But it is the political economy that is driving global climate action now, not diplomatic negotiations. The most important decisions are already made. President Xi promised to stop all Chinese coal investments overseas. Prime Minister Modi’s launched a green hydrogen mission. The European new green deal and its taxonomy which will drive business green in Europe.”

Solheim is optimistic that India can act as a catalyst for curbing greenhouse gas emissions.

“India is right to point to the fact that developed nations have produced nearly all historic climate emissions and still pollute a lot more per capita than India. But there is no reason for India to follow the old paradigm that first you pollute horrendously and only when you get rich you start cleaning up,” Solheim said.

“The 21st century is about the win-win policies. India can urgently go green and create millions of jobs bringing people out of poverty at the same time.”

On the recent coal shortage in India and China and a sign for the countries to move away from coal, he said: “Yes. It shows the need for even higher speed in investment in solar, wind green hydrogen and other renewables. But let’s all be fair. China is the world’s biggest solar power. India is number two.”

On China’s recent announcement to end overseas coal finance as a move to make the Belt and Road Initiative greener, the former UN Environment boss said, “Indeed. It’s probably the most important green news in the world in 2021. China will not only stop coal investment, but put its full industrial might behind green technologies and investments. This will have a massive impact in many Belt and Road countries.”

Regarding the electric vehicles boom, he said in his country Norway eight out of 10 new cars sold in September were electric.

“The electric mobility revolution will come extremely fast. Most major car makers will go big into electric. This is a great opportunity for India to get jobs and prosperity producing electric two-wheelers, three-wheelers, and four-wheelers. Companies like Mahindra, Tata, Ola and others are grasping this opportunity.”

How do developed and developing countries work with each other to make climate action with optimum use of renewables possible. He replied, “It’s good for developing nations to exchange best practices and ideas and to do mutual investments. Indian companies have a lot to offer to other developing countries providing investment and technology for solar power, electric vehicles and green hydrogen.”

“Both Ambani and Adani have made huge green hydrogen bets. That may benefit many developing countries.”

“Reliance is a good partner for Afroz Shah’s Foundation where I am chair of the advisory board. To showcase the enormous opportunities to turn waste into value, Reliance made jackets from 55 per cent plastic waste, the rest is wood. These are beautiful, fancy, fashionable jackets. People envy them when they see them.

“We must turn waste into an opportunity for jobs. Let us be a little bit innovative,” Solheim concluded.

This year COP26, being held from October 31 to November 12 in Glasgow in Scotland, has taken on an elevated sense of urgency and is also undoubtedly the most significant milestone for progress on climate change since the 2015 Paris Agreement.

It will see representatives from over 200 nations that will present an overdue opportunity to reach international agreements on slashing greenhouse emissions and more before it’s too late.