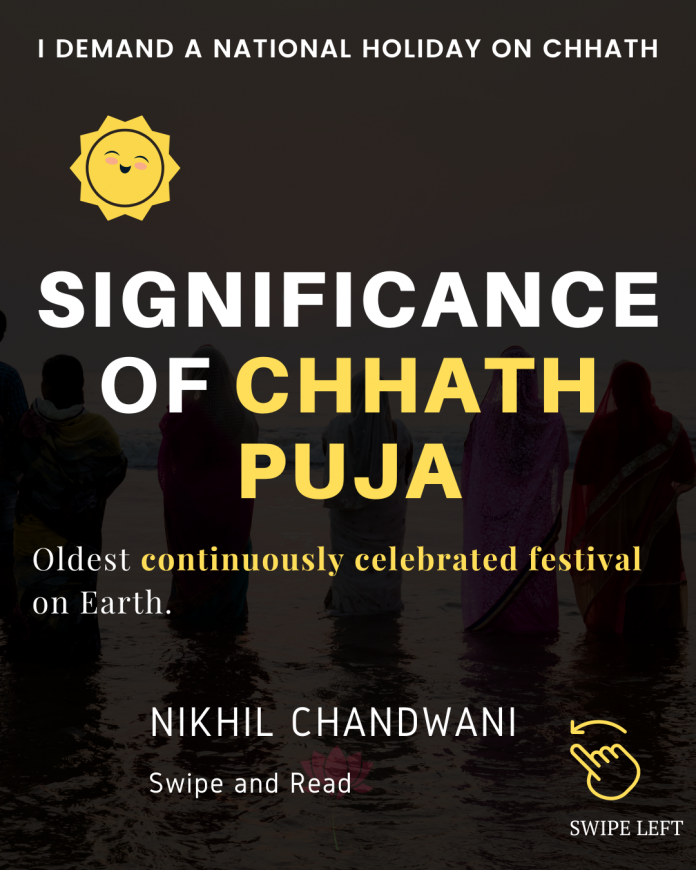 The place has an aura that can only be understood by the most passionate ones.

The place has the sharpest minds, the brightest determination & some customs that need to be understood, respected, and appreciated globally. Yes, today, we explore the origin and significance of Chhath Puja! But, we will also explore why government must announce a National Holiday on such festivals and focus on educating the nation about these classic rituals from Bihar.

Chhath is one of the oldest continuously celebrated Hindu Vedic festivals historically native to the Indian subcontinent, especially the Indian states of Bihar, Uttar Pradesh, Jharkhand, and the Madhesh region of Nepal. The Chhath Puja is dedicated to the Solar deity (Surya) to thank him for presenting the bounties of life on Earth and to request the granting of specific wishes. The term ‘Chhath’ literally means ‘six,’ and hence it (Sandhya Arag) is observed after six days of Diwali. People from Bihar are settled all over India. So this festival is vividly celebrated nationally, in almost all Indian states.

In Ramayana, when Bhagwan Rama and Mata Sita returned to Ayodhya, people celebrated Deepawali, and on its sixth day, Ramrajya was established. On this day, Rama and Sita kept fast, and Sita performed Surya Shashthi/Chhath Puja. Hence, she was blessed with Luv and Kush as their sons.

Chhath Puja was also performed by Karna, who is considered to be an offspring of Bhagwan Surya and Kunti. He ruled over the Anga Desh, the modern-day Bhagalpur in Bihar, during the age of Mahabharata.

As per history, Chhath Puja is been performed continuously since the Early Vedic Period. This makes it the oldest continuously celebrated festival on Earth.

Chhath Puja is a festival of religious and cultural importance. This is the only festival in which the Sun is worshipped and offered an arghya. Arghya is offered in the evening and in the morning to the setting and rising Sun respectively. The worship of the Sun in Hinduism is of great importance. He is the only God whom we can see regularly. In the Vedas, the Sun God is called the soul of the world. The light of the Sun can destroy many diseases. With the promising effect of the Sun, the person gets health, wealth, and self-confidence.

On the occasion of Chhath Puja, ‘Chhathi Maiya’ is also worshipped and hailed. It is said doing this Puja brings fortunes, well-being for the children, pleasure, and desire. In the Hindu religion, the Shashthi Devi has also been known as Manas Daughter of Brahma Ji. In the Puranas, she is also said to be the Maa Katyayani, who is worshipped on Navratri on the Shashti date. Shashthi Devi is said to be Chhath Maiya in the local language of Bihar. Culturally, the main feature of this festival is the simplicity of tradition, love for purity, and nature.

Day 1: On the first, a sattvic meal is prepared, and devotees also offer Kaddu Bhaat to the deity. Devotees also take a dip into rivers. The women observing the Puja consume a single meal on this day. Homes are properly cleaned.

Day 2:  On this day, people observe fast from sunrise to sunset without even drinking a drop of water.

Day 3:  On the third day, devotees perform aarti and worship Chhathi Maiya. On this day, a prasad for Chhath Puja is prepared. All the prasad and fruits are placed in a basket and taken to Chhath ghats near rivers or ponds. Devotees also offer arghya to the setting sun in the evening. Usually, devotees stand in the river to offer arghya to the Bhagwan Sun.

Beautiful rituals & some exceptional significance, right? Next time when you hear the word ‘Bihar,’ remember that they’re fortunate enough to protect and celebrate the world’s oldest festival. Biharis have protected Dharma and shielded our culture from enemies. Indian government MUST announce a nationwide holiday on Chhath, and the government must educate everyone about the significance of this festival. This is the purest form of worship, and we must know it, learn it, respect it and perhaps follow it.