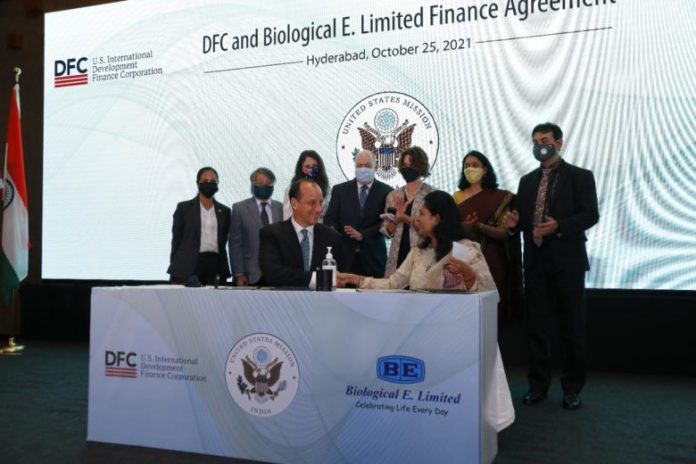 DFC Chief Operating Officer David Marchick and Biological E. Limited Managing Director Mahima Datla signed the agreement which will support capacity for production of more than one billion doses of Covid-19 vaccines by the end of 2022 for India and for developing countries around the world.

The funding was announced at the Quad Leaders Summit in March 2021 and it works in support of the commitment set out by the US President Joe Biden and his counterparts in Quad, which comprises Australia, India, Japan and the US.

The agreement will help bolster near-term Covid-19 response efforts and will also benefit long-term global health in India and throughout the Indo-Pacific region, the officials said.

DFC’s investment in Biological E. Limited is part of the agency’s Global Health and Prosperity Initiative, which is focused on supporting the global response to the Covid-19 pandemic and strengthening health resilience in developing countries.

DFC, through the initiative, is working to catalyze $5 billion in projects that bolster health systems, support infrastructure development, and expand access to clean water, sanitation, and nutrition.

DFC and Biological E. have also collaborated with the Coalition for Epidemic Preparedness (CEPI), which provided early research and technical support for the company’s Covid vaccine efforts.

David Marchick said the financing arrangement was a part of President Biden’s overall strategy to end the pandemic in 2022. “Scaling Biological E’s new facility, which is already producing vaccines, will help close the vaccine gap and save lives in developing countries,” he said.

The FDC COO said the financing arrangement was one step in the direction to enhance global vaccine production capacity from 5 billion doses to 15-16 billion doses in the next one year.

The DFC is financing three companies — two in Africa and one (Biological E in India). They will together produce over 2 billion doses between now and next year, he said.

He pointed out that the US was donating 1.1 billion doses to the developing world and it has already delivered 200 million doses to over 100 countries.

Mahima Datla assured DFC of successful implementation of the agreement and rolling out of a billion doses very soon.

“We are currently in the process of building enhanced manufacturing capacity to augment Covid vaccine availability in the entire Asia-Pacific region and indeed the world,” she said.

She pointed out that Biological E was working on development of two Covid vaccines in partnership with Baylor College of MedicineAand Jhonson & Jhonson.

Ministry of External Affairs Joint Secretary Vani Rao said this was a testimony to India’s vaccine industry which made a name for itself globally by developing high quality vaccines which are also cost effective.

She recalled that the first Quad leaders’ summit decided to set up a working group for collaborative effort in ramping up production of vaccines and their procurement and distribution in the Indo-Pacific region.

She said Japan will help the countries procure the vaccines while Australia will provide logistics ensuring last mile delivery.

Telangana’s Principal Secretary for information technology and industries Jayesh Ranjan said that Hyderabad stands very tall in life sciences vertical. He pointed out that biotech companies here are producing 6 million vaccine doses every year, contributing to one third of the world’s vaccine production.

The official said Hyderabad is also an important location for the pharma industry. Forty per cent of the country’s pharma production and 50 per cent of exports happen from Hyderabad.

The size of Telangana’s life sciences industry is close to $50 billion and the State government has set an ambitious target of doubling the size to $100 billion by 2030 and in the process adding 400,000 new jobs.