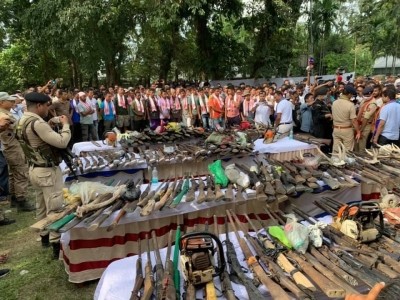 (IANS): In a very significant development, as many as 500 poachers and wood cutters surrendered their arms at Chirang in western Assam’s Bodoland Territorial Region (BTR) on Saturday, officials said.

Officials said that responding to the appeal of the Assam government and the Bodoland Territorial Council (BTC) administration, over 500 poachers and wood cutters deposited their arms and ammunition at a function at Bengtol.

BTC Executive Member Ranjit Basumstari said that the surrender of this large number of poachers and wood cutters, who are directly involved in felling of valuable trees, deforestation and killing of wild animals, is considered as a significant step in the protection of forests and wildlife in the region.

He said that a campaign would be launched to move away from the protected forests soon and before that all the people inhabiting inside the forest areas would be relocated.

Basumstari said that the poachers and wood cutters have deposited 254 hand-made guns, huge quantities of explosives and 82 pieces of wood and ammunition.

He announced that Rs 50,000 would be provided to each poacher and wood cutter and skill development training would be imparted to them.

Many other executive members and officials of the BTC were present in the surrender ceremony, first of its kind in Assam.

On the occasion of World Rhino Day on September 22, as many as 57 poachers surrendered their arms and wildlife parts near the Raimona National Park in BTR, comprising the four western Assam districts of Chirang, Baksa, Udalguri and Kokrajhar, bordering Bhutan and West Bengal.

Pramod Boro, the chief executive member of the BTC that administers the BTR, also gave financial aid to the poachers who decided to give up poaching and take up alternate vocations.