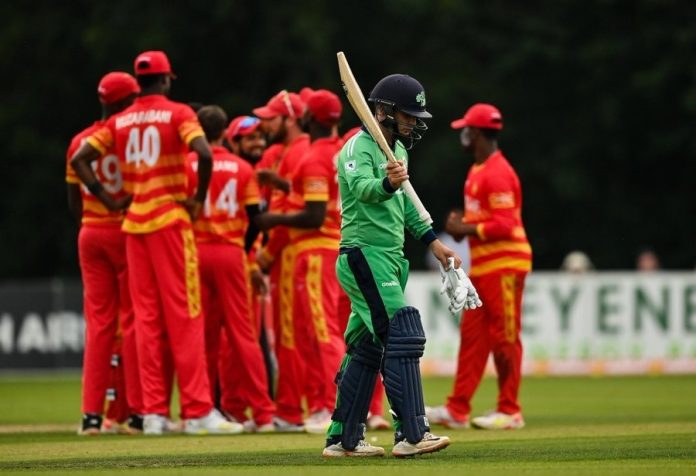 Craig Ervine (64), and Sikandar Raza (59 not out) struck half-centuries as Zimbabwe came up with a superb all-round performance to beat Ireland by 38 runs in the first One-dayer.

Boosted by fine innings by Ervine and Raza, Zimbabwe posted a competitive total of 266 for seven in their 50 overs and then with Blessings Muzarabani claiming 4/29, successfully defended the total. Despite William Porterfield (75) and Harry Tector’s (50) resistance, Ireland were bundled out for 228 runs in the 49th over.

Zimbabwe not only took lead in the three-match ODI series but also snatched a vital ten points in their Cricket World Cup Super League campaign.

Ireland opted to field in the first ODI against Zimbabwe. Brendan Taylor alongside Regis Chakabva opened the innings but the partnership couldn’t sustain for long. Chakabva was the first to perish for 2 runs with Craig Young providing the breakthrough.

Zimbabwe captain, Craig Ervine joined Taylor in the middle for a hard-fought stand of 71 runs off just 59 deliveries. However, Taylor was dismissed just one shy of a half-century by Simi Singh after he miscued an attempted sweep shot. Building on the strong foundation of 85 in the 15th over, Sean Williams and Ervine battled for a 99-ball 49 run stand.

Ervine however continued his offence and registered his 15th ODI half-century. Just as Zimbabwe were into the final 10 overs, Ervine departed for a well-made 64 (96), caught at extra-cover by Andy Balbirnie off George Dockrell.

Raza arrived at the crease with all guns blazing and pushed the total to a competitive 266/7 with his 44-ball 59 alongside crucial contributions of 19 from Wessley Madhevere and 18 from Luke Jongwe.

In their reply, Ireland were off to a steady start courtesy of William Porterfield and Paul Stirling. The duo stitched together an opening partnership of 64 off 92 balls but Ireland lost Paul Stirling in the 16th over. Thereafter, Harry Tector joined the crease with Porterfield for an impressive 71 runs partnership. But the loss of Porterfield after he scored 75 runs in 110 balls triggered a collapse hard to recover from. However, Tector succumbed to pressure and fell for a well-made fifty off 55 balls as a leading-edge carried to short third man off Williams’ bowling.