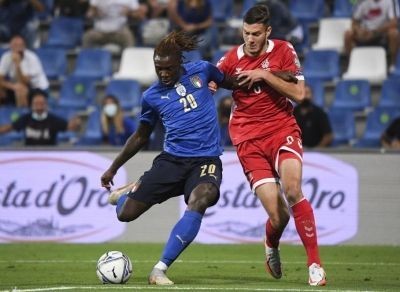 Italy continued their unbeaten run as they smashed Lithuania 5-0 in the 2022 FIFA World Cup qualifiers on Wednesday night, with starlet Giacomo Raspadori scoring his maiden goal at the senior national level.

The Azzurri entered Mapei Stadium with back-to-back draws against Bulgaria and Switzerland and are unbeaten for 36 consecutive games.

Roberto Mancini made sweeping changes in the starting lineup, as Gianluigi Donnarumma stood between the sticks, Alessandro Bastoni partnered Francesco Acerbi at centre-back, Bryan Cristante and Matteo Pessina started in the middle of the park, while Moise Kean, Raspadori, and Federico Bernardeschi formed the trident up front, reports Xinhua.

The home side broke the deadlock in the 10th minute when Arvydas Novikovas’s poor back pass turned into an assist for Kean to drill home.

Italy doubled the lead four minutes later with a stroke of luck, as Raspadori’s attempt took a deflection off a defender to go beyond the goalkeeper, which was credited as an own goal.

But Raspadori did get his goal in the 24th minute as Giovanni Di Lorenzo’s square pass was blocked, the Sassuolo striker was alert to tap in the rebound.

Kean bagged his brace in the 29th minute when Bernardeschi’s stunning lobbed pass found his Juve teammate who cushioned a volley into the net.

Di Lorenzo sealed the game 5-0 with a cross-shot looping into the net.

Italy lead Group C with 14 points, six ahead of second-placed Switzerland who were held by Northern Ireland on Wednesday.