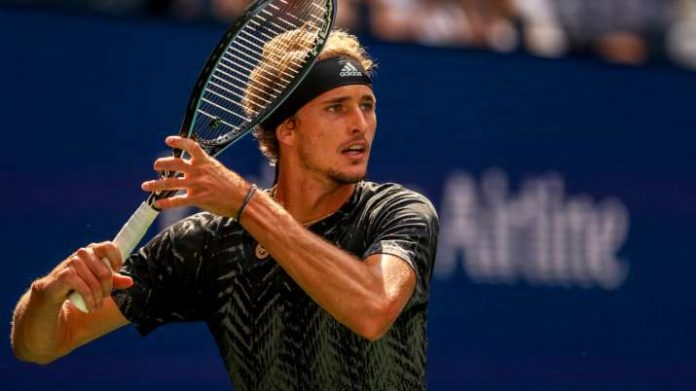 Germany’s World No. 4 Alexander Zverev won his 16th consecutive match of the year as he stormed into the semi-finals of the US Open, beating Lloyd Harris of South Africa in straight sets on Wednesday.

The fourth seed, who is on a winning streak since the start of the Tokyo Olympics in July, raced past Harris, 7-6(6), 6-3, 6-4 at the Flushing Meadows here. Zverev hit 43 winners and broke service four times to make back-to-back semis in New York.

“He was serving incredible, in the first set especially. I mean, I didn’t have a lot of chances on his serve and somehow managed to win that first set, loosened me up a little bit and started playing a lot better,” Zverev, the Tokyo Olympics and Cincinnati champion, said after the match.

“In the third set, he started swinging. He started playing incredible tennis. Yeah, I’m happy to be through in three (sets).”

Zverev’s aggressive, flat returning, and heavy forehands forced Harris to play deeper behind the baseline that he prefers and limited the South’African’s ability to dictate play. The German also continued his strong serving performance this tournament, closing out the match with a 136 mph ace, his 21st of the match.

Zverev next faces the winner of the match between sixth seed Matteo Berrettini of Italy and world No. 1 Novak Djokovic, who close the evening session in Arthur Ashe Stadium. Zverev beat Djokovic en route to his gold medal run at the Tokyo Olympics, where his streak began.

“I hope it goes for eight hours and 30 minutes,” Zverev said.

Harris was playing in his first major quarter-final and making his debut at the Arthur Ashe Stadium. But t’e moment didn’t overwhelm him.

The 24-year-old broke first to give himself a chance to serve out the first set at 5-3. Zverev broke back but Harris had a set point at 6/5 in the tie-break. But Zverev saved it and then won the opening set with a service winner.

From there, World No. 46 Harris never recovered. The baseline rallies he was winning st’rted going Zverev’s way, and the German rode the momentum.

Looking to join Andy Murray (2012) as the only man to win the Olympics and US Open in the same year, Zverev broke early in the second set and again in’the third as Harris’ forehand abandoned him. The South African finished with 26 unforced errors, 16 from his forehand.

The 24-year-old German will be happy to advance but less pleased with how he closed out the match. Serving at 4-1, 40/0 in the third set, Zverev produced a string of errors to drop serve and was also pushed to deuce in his next service game, escaping with a pair of aces to restore order at 5-3.

However, Zverev closed it out with his 20th ace after just over two hours of play.

“I had my opportunities. Didn’t exactly go my way,” Harris said. “Nonetheless, still a lot of positives to take from the week.”

Indeed, the South African had a lot in the week to look back on fondly as he gets back to the ATP Tour with confidence, having played his first quarter-final here.

He can actually look back at the entire season with satisfaction as he has 24 match wins so far, including a victory over Rafael Nadal at the Citi Open in Washington, D.C. during the US Open series.