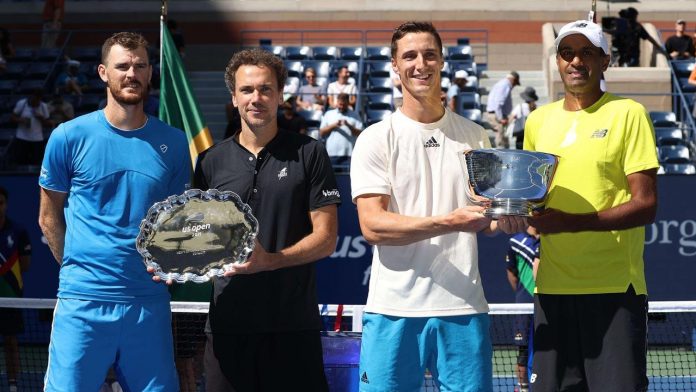 Fourth-seeded Rajeev Ram and Joe Salisbury battled back to overcome Jamie Murray and Bruno Soares 3-6, 6-2, 6-2 in the US Open men’s doubles on Saturday (IST) to lift their second major trophy as a team.

The duo rallied from a set down against Murray and Soares, winning 78 per cent (36/46) of their first-serve points to secure victory after one hour and 44 minutes.

“It is just amazing to be out here,” Salisbury said during the trophy ceremony. “It was my first time playing on Arthur Ashe and to be playing in front of such an amazing crowd, it was a great atmosphere. It made it such a fun match.

“To have won this with Rajeev is amazing, it is a dream come true. For the past three years he has been an incredible partner. I couldn’t ask to be beside anyone better on court. We look forward to getting some more titles together,” Salisbury told atptour.com.

The American-British pair triumphed at the Australian Open in 2020 and arrived in New York in strong form, after clinching their first ATP Masters 1000 crown as a team in Toronto. They now hold an 11-1 record since Wimbledon, where they reached the semifinals.

“I can’t ask for a better partner,” Ram added. “We got together three years ago and didn’t know each other that well, but it has been the most unbelievable run. Joe is amazing. I really appreciate you and everything we have done together.”

Earlier this year, Ram and Salisbury defeated Murray and Soares in the last four at the Australian Open, before falling to Ivan Dodig and Filip Polasek in the championship match. They now lead Murray and Soares 2-0 in their ATP head-to-head and hold a 2-1 record as a team in major finals.

After a tight start, Murray and Soares started to find their rhythm on return as they hit with great depth to force Ram and Salisbury into errors. They broke in the seventh game of the first set to lead and sealed the opener when Ram pushed a forehand wide.

However, Ram and Salisbury raised their intensity in the second set, closing the net effectively as they raced 4-0 ahead. The American-British team won 88 per cent (14/16) of their first-serve points in the set to level.

Murray and Soares were aiming to lift their second US Open trophy, having been victorious at Flushing Meadows in 2016. The British-Brazilian team were teaming for the first time since Wimbledon, after Soares underwent surgery to remove his appendix upon arriving at the Tokyo Olympics.

“They turned it around pretty well,” Murray said during the trophy ceremony. “We lost momentum at the start of the second set and the match changed a lot. We are really proud with how we competed this week and are looking forward to the future.”