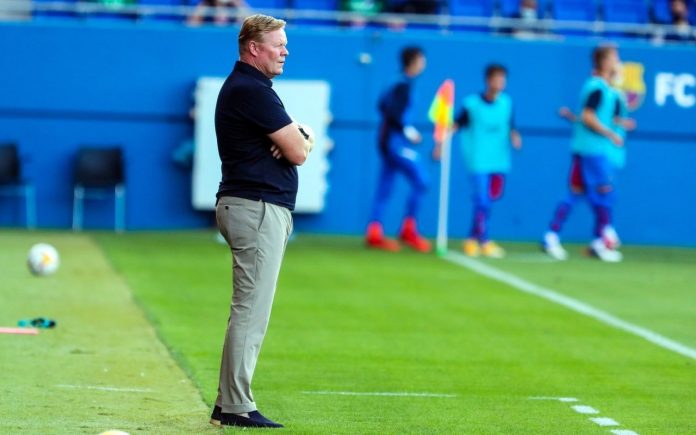 (IANS): The pressure continues to mount on FC Barcelona coach Ronald Koeman after his side was held to a 0-0 draw away to Cadiz on Thursday evening.

Koeman was already under pressure ahead of the game after last week’s 3-0 defeat to Bayern Munich, Monday’s 1-1 draw at home with Granada and his decision to read a communique rather than hold a press conference on Wednesday on the eve of the match.

Although club president Joan Laporta said earlier in the day that Koeman retained his support, the coach’s position has been further weakened by another display where his side struggled to find fluidity until a chaotic last 15 minutes when both sides had chances to win the game.

Barca failed to create any clear chances in the first half, with 17-year-old Gavi their best player on the pitch.

Barca briefly improved after Sergi Roberto came into the game for the second half with Memphis Depay missing a good chance after Marc Andre Ter Stegen had saved from Alvaro Negredo at the other end.

Barca were reduced to 10 men in the 65th minute after Frenkie de Jong was shown two yellow cards in five minutes, although TV images showed the second might be too harsh after he had touched the ball and withdrawn his foot to try and avoid connecting with Cadiz defender Espino, Xinhua reports.

Ter Stegen saved well from Salvi with 10 minutes to go, while Philippe Coutinho, who had come on as a substitute, fired a free-kick wide in the last minute of normal time.

The game completely opened up in injury time, with Memphis misplacing a header and firing wild when well placed and Salvi seeing another effort blocked by the Barca defense.

Koeman was then sent off in the last minute of injury time after an incident that saw Sergio Busquets booked for kicking a second ball at a Cadiz player as the home side attacked. Whether he will have another chance to sit in the Barca dugout is a moot point.

Earlier in the day Aritz Elustondo scored twice and Mikel Merino also got on the scoresheet as Real Sociedad won 3-2 away over Granada in a game that ended with some home fans calling for the dismissal of coach Robert Moreno.

Meanwhile Kike Hermoso, Juanmi and Willian Jose all scored as Betis claimed a 3-1 win away to Osasuna in a game where they exploited their pace on the break.

On Wednesday Real Madrid returned to the top of the table with a 6-1 thrashing of Mallorca.