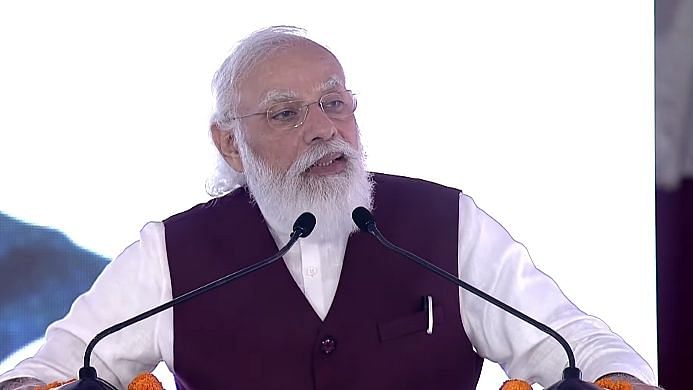 Prime Minister Narendra Modi lashed out at critics of Central Vista project on Thursday during inauguration of the Defence Offices Complexes in Delhi.

The Prime Minister said that the people who are against the Central Vista Project conveniently ignore the fact that the defence complexes project is also a part of it. “These people ignore this fact so that they can continue spreading falsehood regarding the project,” he said.

About defence complexes he said that these new complexes will now make it feasible for the armed forces to operate in better working conditions with all modern amenities.

The prime minister said, “Today the world is witnessing the magnanimous Central Vista that has been established on the pedestals of modern technology and facilities to enhance the quality of work for the Army officials working 24X7.”

He also said that when the country is focusing on Ease of Living and Ease of Doing Business, modern infrastructure plays an essential role. “This is the spirit at the core of the Central Vista projects being done.”

Modi said that the projects have been completed in 12-13 months while the estimated timeframe was 48 months. It saved 50 per cent of time and has also employed thousands of people that too when there was Covid-19 pandemic.

On the occasion, he also launched the Central Vista project’s website.

Defence Minister Rajnath Singh, present during the occasion, complimented Prime Minister Narendra Modi for inaugurating the newly constructed Defence Offices Complex, which is a state of the art facility.

“The successful completion of this project in a record time is indeed a significant milestone in the history of India’s defence sector,” he said.

Singh further pointed out that this Defence Offices Complex is in line with the Prime Minister’s vision for a ‘New India’ and his commitment for the ‘Central Vista’ project.

“I express my heartfelt gratitude to PM Modi for inaugurating the Defence Offices Complex and sharing his words of wisdom on the occasion,” he said.

Defence Minister Rajnath Singh said, “Previous buildings were in a tattered state, affected working conditions of our officers… Optimum utilisation of space was not done, which is why this complex has been brought up. Over 7,000 workers can be accommodated in good working conditions.”

Over 7,000 defence personnel will be shifted into new complexes that have been built at Kasturba Gandhi Marg and African Avenue in the central Delhi. These personnel were working from colonial era hutments and barracks which are situated in the back of North and South Blocks on the Raisina Hills.