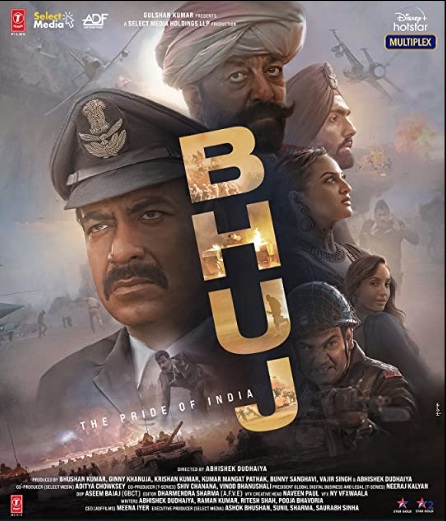 Bhuj shall always be remembered for the war that shook the whole Pakistan. The movie Bhuj: the pride of India will always be remembered as the movie that hobbles through a maze of dogfights, explosions and a confused story tale. The story is narrated by the wounded Air Force officer after the Pakistan fighter jet has destroyed the Bhuj Air Base.

The India-Pakistan war of 1971 ensued during the Bangladesh liberation war in East Pakistan (now Bangladesh). As India aided East Pakistan to end West Pakistan’s (now Pakistan) oppressive regime on it, PAK attacked western regions of India hoping to use it as a bargaining tool to trade against the captured territories in the east. Various Indian air bases were bombed as part of the strategy. The Bhuj airbase was one of the prominent IAF (Indian Air Force) territory that took a massive hit.

On the night of December 8, PAF (Pakistan Air Force) jets dropped more than 14 Napalm bombs on the Indian Air Force airstrip in Bhuj. The impact rendered the airstrip useless and the Indian combat aircrafts dysfunctional. The IAF expected the Border Security Force (BSF) to restore the airstrip but time was ticking, and labour was scarce. It was during this time that 300 villagers—mostly women—from Madhapur in Bhuj, decided to step in to defend the country by repairing the damaged airbase within 72 hours. In Bhuj: The Pride of India, director Abhishek Dudhaiya remembers these unsung warriors and the story of their incredible bravery, that deserves to be told. Credit to Ajay Devgn for bringing this act of valour to screen. However, can the execution match the intent?

Over the years, the demeanour of Indian war movies has seen a dramatic shift. From chest thumping jingoism to humanising the war heroes and seeing them as people first — we have come a long way. Even Uri: The Surgical Strike (2019) had a restrained sense of personal loss and grief and showed the consequences of war beneath the high josh. War heroes are respected, even revered, but they aren’t projected as invincible anymore. There’s a certain honesty in their heroism. That’s not the case here.

Bhuj’s makers make it clear right in the disclaimer that this film is a work of fiction inspired by true events. This explains its dramatic approach to retelling history. The film often forgoes the nuances to play to the gallery. Though made in contemporary times, Dudhaiya’s expression is more true to the 90s school of thought, where everything is literally spelt out. Think, JP Dutta’s Border (1997). This one resorts to hyper nationalism as well. One might argue that everything’s fair in love and war, right? Well, not really when the film risks making a military operation look irrational to amp up the emotional quotient. Loud bhajans being sung with dhols at the reconstructed airstrip defies logic because it was supposed to be a covert operation that had to evade further incoming bombings. In reality, it was reported that the Bhuj women had to wear green and cow dung was used on the strip to camouflage it from the PAF planes. One can overlook the drama, but in a premise such as this, trading off logic at the cost of dramatisation, seems hard to digest. The writing could have been more mindful.

The first half is scattered with various characters in cameos giving brave speeches without a context. The depiction of events leading upto the attack on Bhuj airbase are disorderly. The film however, redeems itself in the second half as that’s where the real action and drama unfold. Thereon, it’s a gripping thriller that keeps you invested. From 120 soldiers guarding the Vighakot post and defending the country to witnessing a plane rest its front on a truck for landing — the action game, (realistic and unrealistic) is on point. Even the aerial combat scenes keep you invested.

The sound and visuals are made for the big screen. While the VFX is strictly passable, the sound is competent enough to transport you to the battlefield. Ajay Devgn’s template slowmo shots are plenty and he gets the intensity of his character right. Sanjay Dutt, Sonakshi Sinha, Sharad Kelkar and Ammy Virk are decent as well. Among the cameos, casting Navni Parihar as former PM Indira Gandhi works well.

I would like to give this movie 2.5 star for being an interesting watch, after ignoring the few hiccups. The movie does tell a beautiful war tale, it could be confusing and dragging but at the end, we cheer when India wins.