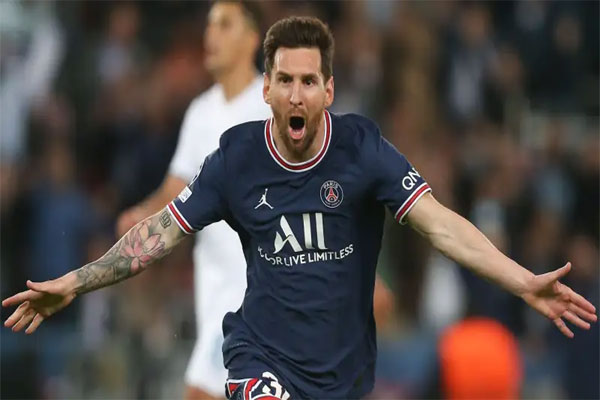 It was a moment that Paris Saint-Germain fans had been waiting for since the arrival of Lionel Messi in mid-August, and finally it came in style and on a big occasion.

In front of nearly 50,000 home supporters on Tuesday, the Argentine superstar scored his first goal for his new club, helping the Ligue 1 giants take a 2-0 revenge over English Premier League champions Manchester City, to whom they lost in the semifinals of last season’s Champions League.

The 34-year-old forward sparked in the 74 minutes, running the ball into the front and after a good one-two with Kylian Mbappe, he found the net with his iconic left-foot strike.

The goal sent the packed Parc des Princes into raptures with deafening roars hovering over the stadium and the crowd chanted by the scorer’s name, Xinhua reports.

“It was a perfect night against a great opponent. For us, it was very important to win this game after Brugge,” said Messi, who has played three matches for PSG before this week but failed to open his scoring account.

“I am very happy to have scored. I haven’t played much recently,” Messi added. “I am adapting little by little. What is important is to keep winning.”

It was Messi’s 121st goal in the Champions League and 27th in 35 appearances against the English teams – far more than any other player. With this goal, the six-time Ballon d’Or winner has scored in 17 consecutive Champions League seasons, equalling a record set by Karim Benzema just minutes earlier in another clash.

“I’ve spent 20 years watching him score goals from the other side of the opposite pavement and it’s the first time he scores for a team I manage so I had to celebrate,” PSG’s head coach Mauricio Pochettino said.

“You need this type of performance and players like him need to feel the back of the net. He needs to create links within the team after 20 years in Barcelona. He’s feeling different things, there’s a lot of new feelings for him.”

French midfielder Idrissa Gueye put the hosts ahead only eight minutes into the game. Mbappe dribbled from the right and Neymar missed his cutback, but Gueye appeared in the right place and fired the ball into the top corner.

Pep Guardiola’s side was close to an equalizer in the 26th minute but Raheem Sterling’s header was refused by the bar and Bernardo Silva’s shot hit the woodwork again.

“They can take the space, they are exceptional players, like Messi-Suarez-Neymar at Barca,” Guardiola said after the match, which was City’s first Champions League group defeat since September 2018, when they lost 2-1 to Lyon, before an 18-game unbeaten run.

“It’s hard to control Messi for 90 minutes. It is difficult to stop him and we had to minimize the opportunities for him to touch the ball. Tonight we did what we know how to do, good or bad, but we are what we are. Tonight there was also Verratti who was extraordinary and managed to find connections with Neymar.”