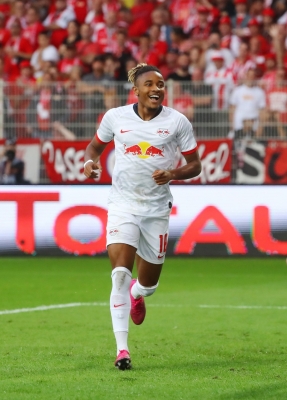 It seemed a difficult decision for Christopher Nkunku. After a game of open doors containing nine entertaining goals, the 23-year-old couldn’t make up his mind whether to cry or laugh.

When looking back at the bright moments of his career in some years the former Paris attacker is inevitably going to remember this special evening in the Citizens arena.

The former French international then might find himself in the same tricky situation to decide between proudness and sorrow.

It appears like a one-hit-wonder having scored three goals in a game against Manchester City, one of Europe’s leading sides, but in the end, losing the game 6-3.

After Lionel Messi in 2016 Nkunku is the only second player to score three goals against Manchester City on their home ground.

Other than Leipzig, Barcelona won their duel 4-0, giving their former coach Pep Guardiola and new City manager a bad time.

This Wednesday evening, the Sky Blues might have been the superior team over 90 minutes, but Nkunku’s Leipzig seemed to always come back and challenge the Premier League side. Sadly enough, only to a certain point, reports Xinhua.

The French forward and his side never got too near to make their fans happy and create a surprise.

The newly formed German team now has to live with a disappointing start into the 2021/2022 season after having lost three out of four league games and spoiling their Champions League opener under these circumstances.

Having to replace their departed coach Julian Nagelsmann and several key players such as Alexander Sorloth (Real Sociedad) and Ibrahima Konate (Liverpool), Dayot Upamecano and Marcel Sabitzer (Bayern) turns into a much bigger challenge than expected.

Nagelsmann’s successor Jesse Marsch talked about bad timing having to meet teams such as City in the Champions League and Bayern (4-1) in the Bundesliga that early in the season.

Like Nkunku, Marsch isn’t overwhelmingly pleased with the result despite the three goals of his striker, which he has been fond of since he joined the side this summer.

Marsch met an entirely motivated Nkunku, who benefitted from an untroubled preparation giving him the chance to do some extra training.

Nkunku took up some muscles counting on intense work-out in the gym. This season was meant to be, in his perspective, the season of his breakthrough.

Now the way to happiness might be longer than he thought.

“This situation isn’t what we were dreaming of. We haven’t reached the rhythm to start well and at the same time, we need some success,” the US-born manager stated.

But the mishaps currently don’t seem to end as they did against City.

Leipzig defender Nordi Mukiele scored an own goal; German international caused a penalty; former City defender Angelino got to send off after 79 minutes due to his second yellow card.

Last season, Leipzig managed to survive a Champions League group containing PSG and Manchester United. This season it seems to require more than a miracle to repeat the success as not even three goals of Christopher Nkunku can help.