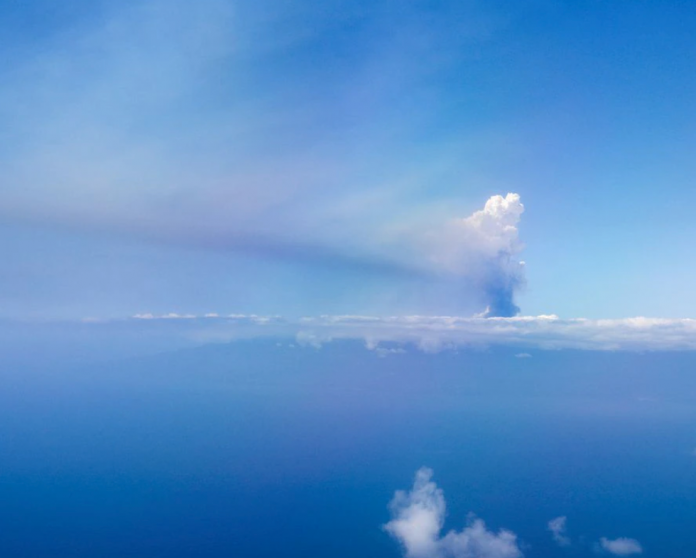 Jets of red hot lava shot into the sky on Spain’s La Palma on Thursday as a huge cloud of toxic ash drifted from the Cumbre Vieja volcano toward the mainland and jeopardised the island’s economically crucial banana crops.

Walls of lava, which turns black when exposed to the air, have advanced slowly westward since Sunday, engulfing everything in their path, including houses, schools and some banana plantations.

Farmers near the town of Todoque raced to save as much as possible of their crop, piling their trucks high with sacks of the green bananas, on which many of the islanders depend for their livelihood.

“We’re just trying to take everything we can,” said a farmer who gave his name as Roberto from the window of his pickup.

Some 15% of La Palma’s 140 million kilogram annual banana production could be at risk if farmers are unable to access plantations and tend to their crops, Sergio Caceres, manager of producer’s association Asprocan, told Reuters.

“There is the main tragedy of destroyed houses — many of those affected are banana producers or employees — but their livelihood is further down the hill,” he said. “Some farms have already been covered.”

Caceres said the farmers were already suffering losses and warned that if lava pollutes the water supply it could potentially cause problems for months to come.

The island produces around a quarter of the Canary Islands’s renowned bananas, which hold protected designation of origin status.

With more than 200 houses destroyed and thousands of evacuated people unable to return home, the Canary Islands’ regional government said it would buy two housing developments with a combined 73 properties for those made homeless. Spanish banks jointly announced they would offer vacant homes they hold across the Canaries as emergency shelter.

Property portal Idealista estimated the volcano had so far destroyed property worth around 87 million euros ($102 million).

Experts had originally predicted the lava would hit the Atlantic Ocean late on Monday but its descent has slowed to a glacial pace of around 4 metres per hour and authorities say it may stop before reaching the sea.

Volcanologists have said gases from the eruption are not harmful to health. But a plume of thick cloud now extends some 4.2 km (2.6 miles) into the air, raising concerns of visibility for flights. The airport remains open but authorities have created two exclusion zones where only authorised aircrafts can fly.

Prevailing winds are expected to propel the cloud northeast over the rest of the Canary archipelago, the Iberian peninsula and the Mediterranean, according to the European Union’s Copernicus Atmosphere Monitoring Service.

National weather service AEMET said air quality had not been affected at surface level and ruled out acid rain falling over the mainland or the Balearic Islands and was even unlikely in Canary islands.

Local authorities have warned people to clean food and clothes to avoid ingesting the toxic ash.