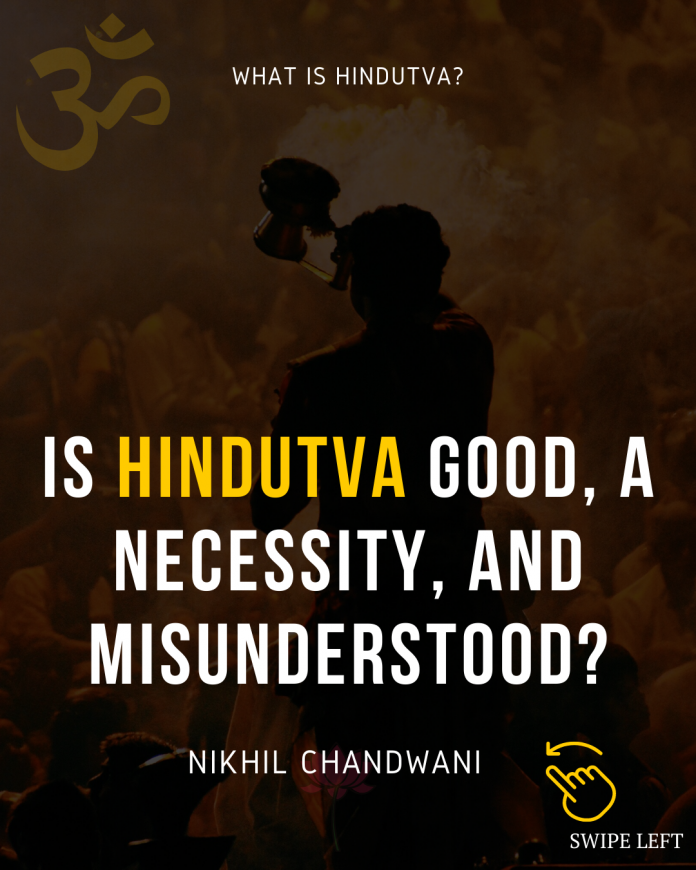 I am compelled to write this article after being bombarded with comments and personal messages accusing me of being a ‘Hindutva fascist’ when I wrote long-form articles on Hinduism, Sanatan Dharma & Indic History.

A quick google search on Hindutva shocked me as Wikipedia states that Hindutva is a variant of right-wing extremism. Numerous other websites claim that Hindutva is wrong, evil, and a broken ideology. Those articles felt like a personal attack because the actual definition of Hindutva, in my opinion, is much more calming and inclusive. The real reason why Hindutva exists is to preserve & protect the world’s oldest religion.

Let’s look at the history and the ‘present-day’ motto of Hindutva to debunk the myth.

Chandranath Basu’s book Hindutva was published in 1892. The first recorded use of the word Hindutva is believed to have been made in this work. Veer Savarkar joined the Hindu Mahasabha and popularized the term Hindutva (Hinduness) to form a collective “Hindu” identity as the heart of Bharat (India).

Why was it needed?

Let’s take a look at our broken son, Afghanistan – a child we lost forever. Sanatan Dharma has been a prevalent religion in Afghanistan since the dawn of time. However, the desert cults chose to wage a religious war against Hindus, Sikhs & Buddhists & we are all but wiped out from the place. Our population has gone from an absolute majority in Afghanistan just a few centuries ago to zero because we didn’t have a common political umbrella – ‘Hindutva’ over there.

Let’s move to an African country, Uganda, to see the importance of Hindutva. Hindus (along with Jains and Sikhs) were forced to close their lucrative businesses in Uganda and flee in the early 1970s. Why? Because General Idi Amin, himself a Muslim, had announced that he had a dream, where his god told him that the Asians, exploiters who did not want to integrate with the Africans, had to go. Hindus had to close down their businesses, give them away free of cost & run away because they didn’t have a Hindutva umbrella in Uganda. Hindutva means to fight back against atrocities.

Pick up any history book on Christopher Columbus in the United States, and you will see him described in glowing terms as a well-behaved voyager and great explorer. However, Columbus was perhaps the evilest man to have ever lived. He chopped off the Heads of natives on Hispaniola, forced locals to get gold or face death, and around 12 million Indigenous people died in what is today the Contiguous United States between 1492 and 1900 CE. They lost their land, religion, faith, families, culture & their revered gods. The languages they spoke are extinct, and their history is a mystery.

What Columbus from Italy tried doing, the Mughals & the British pushed the same. However, Hindus aren’t extinct in India due to a common political ideology that didn’t have a name in the past, although our fearless kings supremely followed it. The ideology that became ‘Hindutva’ saved India from ‘Native American decay.’