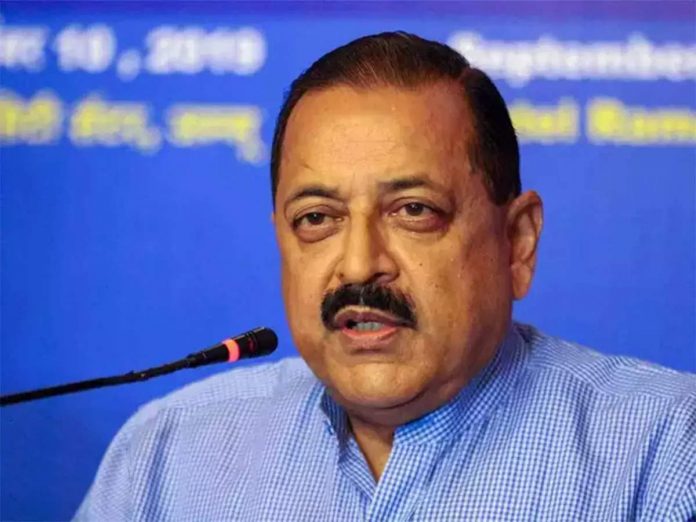 (IANS): India has the potential to meet not just the country’s, but also the global demand for green hydrogen, Union Minister of State for Earth Sciences and Science and Technology, Jitendra Singh, said on Friday.

He was speaking at the inaugural event of ‘International Climate Summit 2021’, an initiative by the Environment Committee, PHD Chamber of Commerce and Industry.

Explaining India’s ‘aspirational’ goal of ‘Hydrogen 2-1-2’, the minister said, “2 means green hydrogen that nation costs for less than $2 per kg; 1 means hydrogen storage plus distribution plus refuelling that cost less than $1 per kg and the last 2 is for replacement of incubement end-use technology with green hydrogen technology of less than 2 millions.”

“More than 90 per cent of our energy is met by imported fossil fuels. Given our population size, the problem of climate change in the world cannot be resolved unless India reduces its emission. That is both a responsibility as well as obligation,” the minister said.

He recalled that Prime Minister Narendra Modi had announced the launch of the National Hydrogen Energy Mission during his 75th Independence Day and spoken about transforming India into a global Green Hydrogen hub for production and exports.

Meanwhile, Minister of State for Environment, Forest and Climate Change, Ashwini Kumar Choubey, said, “We intend to achieve 40 per cent of non-fossil usage by 2030, making a significant stride towards improving the current state of the country and establishing a green hydrogen ecosystem to smoothen the path to a responsible living.”

Addressing the conference virtually, Chairman and Managing Director of Reliance Industries Limited, Mukesh Ambani, said, “India is determined to achieve ‘Azaadi’ from dependence on fossil energy and become ‘AatmaNirbhar’ in new and renewable energy. Since climate change is undoubtedly the most daunting challenge facing human civilisation today, we should rapidly transition to a new era of clean, green and renewable energy. Green hydrogen, a zero-carbon energy will play a fundamental role in the world’s decarbonization plans.”

Stating that every challenge in the human history has come with an opportunity to move to the next level of progress; climate change is an opportunity for human to renew themselves, Ambani shared a target of green hydrogen of 1-1-1.

“$1 per kg of hydrogen in one decade can be achieved,” he said.

Co-organised by Invest India in partnership with NITI Aayog, MoEF&CC, Department of Scientific & Industrial Research, CSIR, and the Department of Science & Technology, Government of India, the summit was attended by experts, nobel laureates, policy makers, industry leaders, and scientists from across the globe.