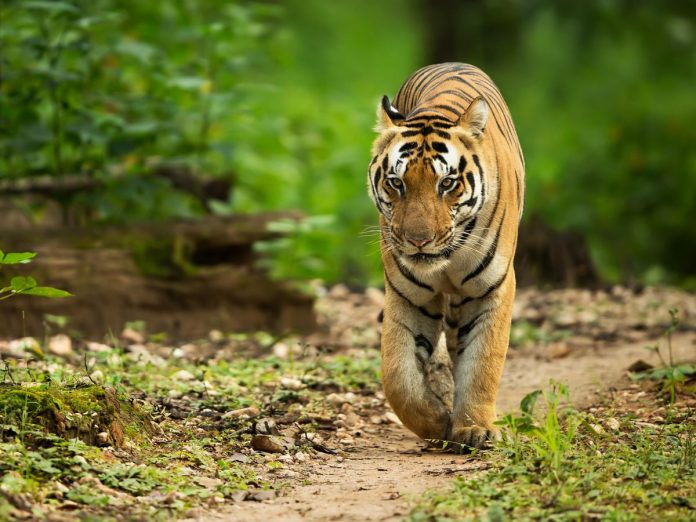 (IANS) An ‘India for Tigers – A Rally on Wheels’ across 51 tiger reserves in 18 states covering a distance of 7,500 kms in seven days will mark the Wildlife Week starting October 2.

This rally, joining India’s tiger dots, is being organised from October 2 to 8 by the National Tiger Conservation Authority (NTCA) to also coincide with the the ‘Azadi Ka Amrit Mahotsav’ celebrations (October 4-10) by the Environment, Forests and Climate Change Ministry.

“The proposed pan-India outreach activity will have twin objectives of celebrating India’s 75 years of independence and spreading the message of biodiversity conservation under the ambit of Project Tiger and Integrated Development of Wildlife Habitats programme of the Ministry,” said a Ministry official.

The rally on wheels would be organised on select dates and assigned routes and will be spearheaded by respective field directors.

All 51 tiger reserves will be participating at landscape level and myriad of events throughout the rally will see active involvement of diverse range of stakeholders and the amalgamation of events will showcase the overarching presence of tiger, which is deep rooted in Indian culture, mythology, history, literature with an appeal to give this majestic big cat its due right to flourish in peace and safety. A ‘Pledge for Tiger Conservation’ too would be administered to the participants.

The charismatic species, the tiger’s presence is vital in regulating and perpetuating ecological processes which makes it an umbrella species. Its protection also conserves habitats of several other species and thereby ensures continuity of the natural evolutionary process in the wild.

Even when India has more than 70 per cent of the global tigers, yet there is an increasingly uncertain future with the risk of reduction in numbers for wild tigers persisting due to poaching, illegal trade, and land use changes.