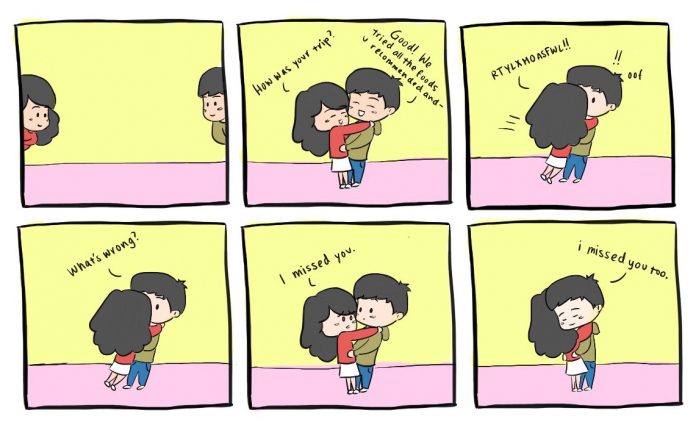 Creating comic strips a rewarding task, but can sometimes be difficult to create. Finding the right storyline and making something entertaining in a few boxes is harder than it sounds. If you want to make a comic strip, like the famous Garfield comic strips, this article is for you.

Decide on a story that you want to publish. Decide what you want your story to be about. With strips, you really don’t have to know every little detail of the story you are trying to tell, but you should have a basic idea of where it’s going. This can help you make sure that you’ve got material for more than just the first few strips. If you’re wanting to do more of a gag-a-day strip, you’ll want to outline the types of jokes you want to make. This will help you decide what kinds of and how many characters you need to pull off those jokes.

Decide on your format. You’ll first need to decide how many panels you want to average, if you want one row or two, etc. For a 1 row strip-like Garfield, 3-4 panels is the norm. For a two-row comic strip like Cul de Sac, 6-8. You can also find 1 panel comics and 3 row comics. Of course, sticking to a particular size will matter most if you plan on publishing your comics in print (such as a newspaper). If you plan on having them online instead, don’t worry about this as much. If you’re printing and even if you’re not, it’s best to at least keep the same width and height for a single row. So, you can have one strip with one row, and another strip with two rows, but all three rows should be the same width and height as each other.

Plan each panel. When you go to make an individual strip, write down and plan each panel. You need to know what is happening where, which characters will be included, etc. Keep it simple. A written script should be as bare-bones as possible. Descriptions of scenery should only be included if they are necessary to the action of the strip.

Balance text and images. Make sure that you aren’t putting too much text in your panels. This can make the comic hard to read and enjoy. Try to limit the number of speech balloons to 2 (3 if there’s a one or two-word balloon), and keep the number of words in a panel below 30 and preferably below 20.

Fleshing Out Your Characters

Give them hopes and dreams. Give your characters things that they want. Having established goals is a great way to drive the story and create storylines when you’re running low on ideas.

Give them flaws. You don’t want characters that seem perfect. This strikes readers as being unrealistic and boring. If you want people to really sympathize with your characters and root for them, give them flaws. They can be greedy, too talkative, rude, selfish, or not exactly smarter than your average bear. Flesh out their lives. Give your characters backgrounds, interests, hobbies, and other things that show that they have actual lives. This makes them seem more real and relatable.

Fight cliches. Fight the cliches! Don’t make your characters “normal” by comic standards. Give them individual and unique characteristics, and think of new and different ideas for your comic. Remember, your characters don’t have to fall in love. Don’t make a character for the sole purpose of being a love interest; make them realistic, and if a love story seems appropriate between two characters, let it develop in a realistic manner. Cliches aren’t how people are, they are how people think they are supposed to be. You can help change this by making your characters behave like people do in the real world.

Sketch the characters. Next sketch in where the characters will go. Make sure that there is enough room for speech balloons. Try to place them in a way that the panel will not look too full or too empty.

Add speech bubbles. Sketch in where the speech bubbles will go. Remember not to cover characters or take up too much of the frame. Keep in mind that sometimes changing the speech bubble’s shape can be used to indicate a particular voice. For example, a bubble with a shape like a cartoon sun (with the pointy edges) can make a character “sound” like they’re yelling. Take advantage of this.

Sketch backgrounds and scenes. After you know where the characters will go, you can sketch in a background or other objects if you want. Some comic strips have very detailed backgrounds, some only include the basic objects that the characters interact with. You can go anywhere in between or beyond.

Do your line work. Go over your sketch lines with something dark and a little more permanent, so that they look clean and professional. Remember to use line width variation and other artistic tricks. When you’re done you can erase the sketch lines. Add text. With the comic mostly drawn, you can add in text to the speech bubbles. Make sure to use a consistent font and text size. Even if a bubble is smaller, the text should always be the same size. Larger or smaller text indicates, respectively, whispering and shouting. Also make sure to use a legible font.

Add color. If you want to, you can color your strip. Keep in mind that coloring is time consuming, and will significantly change the number of strips you are able to get done in a certain period of time.

Decide on an update schedule. If you’re going to get your comics printed in a paper, that paper will probably have a very specific schedule for when they need comics to be updated. You will have to meet those requirements. If you’re publishing online, you’ll have a little more flexibility. Still, remember to be realistic.

Building a buffer. If you want to publish your comics, the first thing you’re going to want to do (regardless of what medium you’re going to use to get your comics out to readers), is build a buffer. This is a backlog of available strips. For example, if you have a single update a week, have a buffer of 30 strips. That way if you get behind, you’ve still got strips available to go out on schedule.

Publish it in a paper. You can publish your comics in a newspaper if you want to. This can be either your school newspaper or a local paper. Call their submissions department to find out if they’re interested in new comics. Getting your comic in a paper, as an unknown, can be very difficult. Be prepared.

Publish your comic online. If you want to reach a larger audience, have more control over your work, and a better shot at controlling how much money you make, you can publish your comics online instead. This is easy to do but how much money you make will vary and it can be difficult to develop a readership. Use a website. There are many websites that are known for hosting comics. Like starting a blog, you can start an easy-to-update page where people can find your comic. Make a website. You can also make your own website. This will give you a little more control but can also be more work. Only do this if you feel you are capable of making a nice, looking site on your own or with a little help. Use your blog. It is becoming increasingly popular to publish comics using blogging sites like Tumblr. This is an incredibly easy publishing mechanism which allows you to put up ads to make money but also not cost you money to host the site.