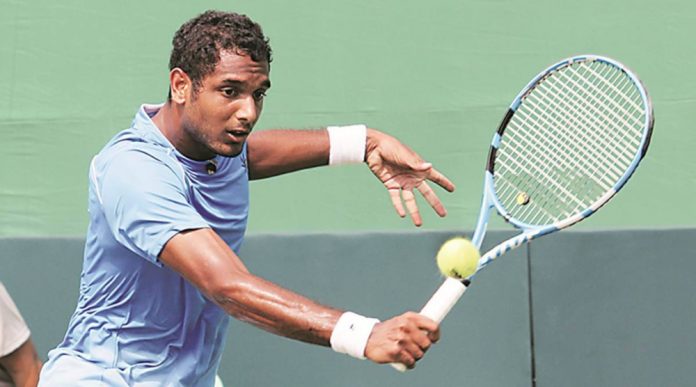 With the match decided in Finland’s favour, Prajnesh Gunneswaran defeated Patrik Niklas-Salminen to win a consolation point for the visitors in their Davis Cup World Group 1 First Round encounter to make the scoreline 1-3 at the Espoo Metro Areena on Saturday.

Gunneswaran won 6-3, 7-5 in just over an hour against the 24-year-old reserve player of Finland who is ranked 491 in the world. But by time Gunneswaran took to the court for the first reverse singles tie, India’s hopes in the match had already ended with Finland taking an unassailable 3-0 lead by winning the doubles encounter earlier in the morning.

India made a desperate tactical switch by pairing Ramkumar Ramanathan with Rohan Bopanna instead of Divij Sharan for the doubles match. But the switch did not work out as the visitors, already trailing 0-2 after losing both the singles on the first day, lost the doubles match in straight sets,thus ending their hopes on Saturday.

The last-minute combination of Rohan Bopanna and Ramkumar Ramanathan went down 7-6(2), 7-6(2) to Harri Hellovoora and Henri Kontinen of Finland in one hour and 38 minutes.

India were staring at defeat after Prajnesh Gunneswaran and Ramkumar went down in straight sets on the first day. Their hopes depended on the doubles combination winning their match and allowing the singles players to make a comeback in the reverse singles.

However, that did not materialise as Bopanna and Ramkumar could not put it across the Finnish pair. They did combine well but as they were playing a match of this stature for the first time, the Indian pair was found wanting on crucial points.

Bopanna said the tactical switch by captain and coach was the right one, though the result was not what they had expected.

“It’s unfortunate that it didn’t go that way and even Ram… first time he was playing a Davis Cup tie with me in doubles, and he really played well. He was returning well and serving well, what he does best. There are a lot of things to learn from this match. To lose 7-6, 7-6, you know, you had some chances and it was pretty close and it could have easily turned the other way and gone to three sets but that’s what, we live by the team and whether we win or lose, we work as a team together,” he said during a virtual press conference on Saturday.

Though the team went down, Bopanna said there were a lot of things that they learned from their outing in Finland.

“It’s a lot of learnings we take from all these ties and there is so much we learn as a team going forward. Of course, we knew coming here that it’s going to be a tough tie, anytime you play away tie, it is going to be difficult. They had somebody as experienced as Emil (Ruusuvuor), who comes there and plays at a very high level.

“I mean the first match for us yesterday was the key. If we had probably won that match, it puts a lot of pressure on Emil going there 0-1 down, and the way Ram plays, he is very aggressive and puts a lot of pressure, it could have made a difference. But having said that, we have to take the positives from this and keep fighting, keep believing in this team that lacked a little this week, to be honest,” said Bopanna after the doubles match.