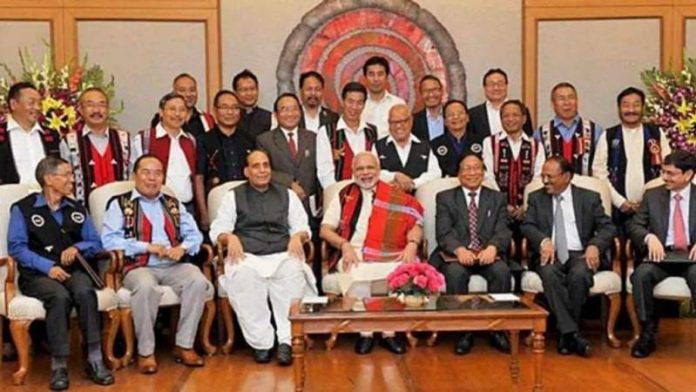 Amid ongoing Naga peace process, the Centre and the Niki Sumi-led group of the National Socialist Council of Nagaland-Khaplang (NSCN-K) on Wednesday signed a ceasefire agreement for one year, till September 7, 2022.

The agreement was signed between the representatives of the NSCN-K Niki group and the Additional Secretary, Home Affairs.

With this agreement, more than 200 cadres of this group joined the peace process.

“The ceasefire will be applicable for the period of one year with effect from September 8, 2021,to September 7, 2022. The ceasefire will be subject to adherence to the Ceasefire Ground Rules to be mutually agreed and signed by the two sides. The Ceasefire Ground Rules will be subject to to mutual review and amendment with the involvement of the both parties,” the agreement reads.

The Home Ministry has already signed a ‘Framework Agreement’ with the NSCN-IM and ceasefire agreements with other Naga groups, namely, NSCN-NK, NSCN-R, and NSCN-K-Khango are already in place.

It had also signed an agreement with Tripura’s National Liberation Front of Twipra-SD in August 2019, by which its 88 cadres along with 44 weapons joined the mainstream in Tripura.

The Ministry had signed a Bodo Agreement in January 2020, under which more than 2,250 cadres of insurgent groups, including all factions of the National Democratic Front of Boroland (NDFB), along with 423 weapons and huge quantity of ammunition, surrendered in Assam and joined the mainstream.

The NDFB was an armed separatist outfit which sought to obtain a sovereign Boroland for the Bodo people, and was designated as a terrorist organisation by the government.

Similarly on February 23 this year, the Union Home Ministry also signed a peace agreement with Karbi groups and a total of 1,040 leaders and cadres of various underground Karbi groups of Assam surrendered along with 338 weapons.

On September 4, it signed a tripartite ‘Karbi Peace Accord’ here in presence of Union Home Minister Amit Shah, Assam Chief Minister Himanta Biswa Sarma, Union Minister Sarbananda Sonowal and representatives of the six Karbi outfits, bringing an end to the decade-long agitation and unrest in Assam.