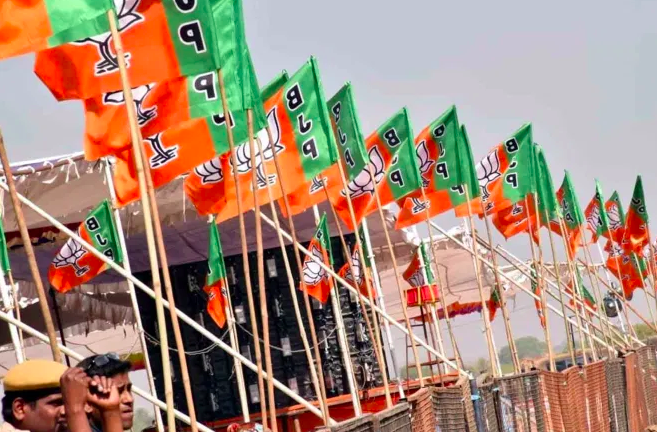 (IANS): The ruling Bharatiya Janata Party (BJP) government is likely to return to power in the electoral contest of 2022 in Uttar Pradesh, the state with significant influence on countrys political landscape, as per the ABP-CVoter-IANS opinion poll.

Other key political players in the state — the Samajwadi Party, Bahujan Samaj Party and Congress are not in a position to dislodge the Yogi Adityanath government in 2022, as things stand today.

According to the survey data, the ruling BJP is expected to grab 41.8 per cent of vote share in the upcoming assembly polls in the state. Notably, the saffron party has been continuously maintained it vote share of around 41 per cent in the state; in 2017 Assembly elections BJP had garnered 41.4 per cent of the votes polled in the state.

Translated into seats, BJP+ is likely to grab 263 seats in 2022 Assembly polls. Though BJP and its allies will witness a dip of 62 seats from the figure of 325 seats they had won in 2017, the alliance is expected to cross the majority figure comfortably.

The Samajwadi Party, emerging as main contender is expected to improve its tally from 48 seats in 2017 to 113 seats this time. The survey further shows that the Bahujan Samaj Party is continuously losing the political ground in the state as the party is expected to get 14 seats this time, it had won just 19 seats in 2017. Congress will be reduced to single digit figure of 5 seats.

The survey data revealed that there isn’t much anti-incumbency against Chief Minister Yogi Adityanath as 40.4 per cent of the respondents said that Yogi Adityanath is their preferred choice for the post of Chief Minister in upcoming assembly elections. During the survey, while 27.5 per cent opined in favour of SP chief Akhilesh Yadav for the top job in the state, 14.6 per cent of the respondents said they waant to see BSP supremo Mayawati as next chief minister.

Interestingly, only 3.2 per cent of those interviewed during the survey wanted Congress leader Priyanka Gandhi to be the next chief minister of the state.

The sample for the poll is 81,006 in five states covering 690 assembly seats. This State Poll is part of the largest and definitive independent sample survey tracker series carried out in India over the last 22 years, conducted by independent international polling agency CVoter, a globally renowned name in the field of Socio-Economic research.

May 2009 onwards, the CVoter Tracker has been carried out each and every week, 52 waves in a calendar year, in 11 national languages, across all States in UTs in India, with a target sample size of 3,000 samples each wave. The average response rate is 55%. Starting 1st January 2019, C Voter is carrying the tracker on DAILY basis, using the rollover sample of 7 days (last 6 days + today) for tracker analysis.