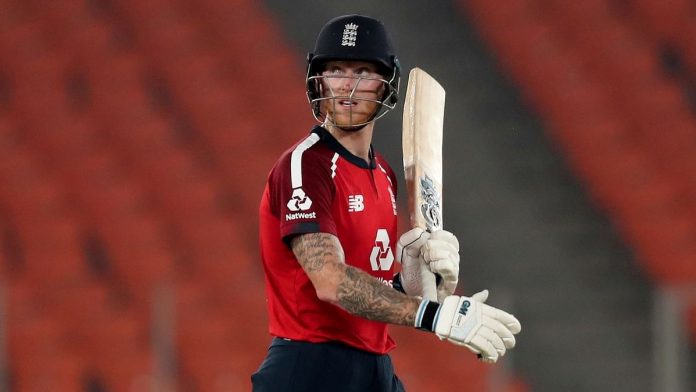 (IANS): England all-rounder Ben Stokes could miss the men’s T20 World Cup in Oman and the UAE in October and November. Stokes has been on an indefinite break from all forms of cricket since July to take care of his mental well-being and give time to his left index finger to heal after surgery.

Stokes is not a part of the ongoing five-match Test series against India and will not take part in the second leg of IPL 2021 starting from September 19. West Indies pacer Oshane Thomas has been called in as a replacement for Stokes in Rajasthan Royals.

“Whether he does travel to Dubai to feature in England’s attempts to unite both global white-ball belts next month is unclear, although sources close to Stokes say ‘he is not even thinking about cricket at the moment’,” said a report by the Daily Mail on Saturday.

With the deadline of naming the squads for the T20 World Cup on September 10, England’s selectors are expected to meet this weekend to decide on the 15-member squad and three reserves. An announcement on the squad could come by September 9, a day before the start of the final Test against India at Manchester.

“As changes can be made freely up until October 10, seven days before the tournament’s group stage begins, Chris Silverwood could provisionally name the 2019 World Cup-winning star within that 18. However, given the circumstances, the ECB may be unwilling to place any undue pressure on their talismanic all-rounder, having said they would give him ‘all the time he needs’ when he announced his break on July 30,” further said the report.

Stokes last international appearance came as a captain for the three-match ODI series against Pakistan. He led a fresh England squad in absence of first choice players due to COVID-19 outbreak. After two outings for Northern Superchargers in the Hundred, it was announced that he would be on a break from the game with immediate effect.