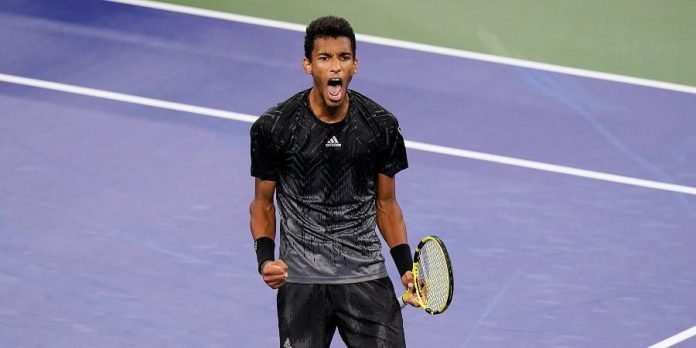 Slamming 27 aces, the Canadian showed great resilience to wrest wrestle back the initiative after dropping the third and fourth sets before rallying to win in front of a vociferous Louis Armstrong Stadium crowd on Friday evening.

“I live for these moments,” Auger-Aliassime said. “I started off the best I could by winning the first two sets but then unfortunately from being a break up I didn’t solidify and things got tricky. He grew more confident and I didn’t serve so well, but the crowd helped me to dig deep,” the Canadian told atptour.com.

“There were a lot of emotions but I tried to settle down and in the fifth set my mindset was to play every point the best I could and to stay focused. It worked, so I will try to keep going this way.”

The world No. 15 has now reached the second week at the Australian Open, Wimbledon and US Open this season. He next will meet Andrey Rublev of Russia or Frances Tiafoe of the US.

Second seed Daniil Medvedev continued his perfect run in New York, cruising past Spaniard Pablo Andujar 6-0, 6-4, 6-3 to reach the fourth round for the third straight year.

The Russian, who overcame Richard Gasquet of France in the first round to record his 200th match win, is yet to drop a set at Flushing Meadows this week. The 25-year-old played with confidence against Andujar, hitting groundstrokes and winning 76 per cent (32/42) of his first-serve points to secure his win after one hour and 56 minutes.

“It was a great match,” Medvedev said in his press conference. “[It is] always great to finish in straight sets. The more matches you can win in straight sets the better. [The] second and third sets were much tighter, a lot of long rallies. I am happy with my level, happy with everything.”

The world No. 2 has now compiled a 14-2 record since Wimbledon, capturing his fourth ATP Masters 1000 title in Toronto and advancing to the semifinals in Cincinnati. Medvedev, who has also lifted trophies in Marseille and Mallorca this year, will next face Daniel Evans of UK after the 24th seed rallied to defeat Australian Alexei Popyrin 4-6, 3-6, 6-3, 6-4, 7-6(1).

“I think it’s tough to describe him [Evans] with one word, but definitely very tricky,” Medvedev said when asked about facing Evans. “I would think very smart because he doesn’t have one shot that is a weapon, and yet he’s a top player for many years already. The way he chooses the right moment to go to the net, to slice, to make a drop shot. His serve is not huge, but it’s tough to return. [He is] a great player.”