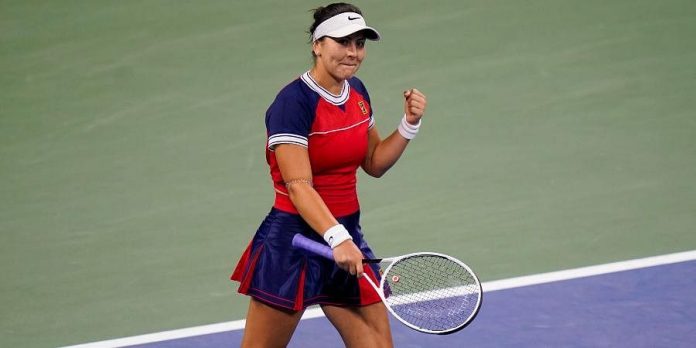 (IANS): No.6 seed Bianca Andreescu of Canada advanced to the third round of a major for the first time since her 2019 US Open triumph, defeating American Lauren Davis 6-4, 6-4 in the second round.

Under lights at the Louis Armstrong Stadium, Andreescu battled back from a break down four times in the match to edge No.98 Davis in two closely-contested sets. Andreescu managed to break the American’s serve six times and was helped by six well-timed aces on her own serve. The 2019 champion finished the match with 19 winners and 23 unforced errors, outmatching Davis’ 11 winners to 18 unforced errors.

“This match wasn’t easy at all,” Andreescu said. “There were a lot of close games. There was just a point here and there that counted,” she told wtatennis.com.

In her return to New York for the first time since 2019, Andreescu has extended her US Open winning streak to nine consecutive matches.

In her keenly-contested opening match against Switzerland’s in-form Viktorija Golubic, Andreescu came back from a break down in the first and third sets to win 7-5, 4-6, 7-5. Against Davis, she trailed by an early break at 2-0 before earning her first break of the match to level at 2-2. With winds wreaking havoc, Davis broke for a second time to 4-3 but failed to consolidate and Andreescu took the set by breaking Davis for a third time.

The second set proceeded in a similar fashion, with Davis taking advantage of Andreescu’s second serve to break twice — Andreescu double-faulted on break point twice — but each time failing to consolidate. After holding to 5-4, Andreescu finally closed out the match with her sixth break of the match to seal the win after 1 hour and 36 minutes.

“I’m feeling very good out there. I think as the matches are progressing, I’m starting to feel my tennis more and more. I haven’t had easy matches. Even today I know was straight sets, but the games were very tight.

“What I’m very happy about mostly is my serving because I’ve been working a lot on that. Also my movement on the court, I’ve been putting a lot of work in the gym and it’s really paying off.”

Andreescu will face lucky loser Greet Minnen of Belgium in the next round. The world No.104 became the fifth lucky loser to advance to the third round of the US Open in the Open Era after defeating Liudmila Samsonova of Russia. The winner of that match will play either Petra Kvitova or Maria Sakkari for a spot in the quarterfinals.