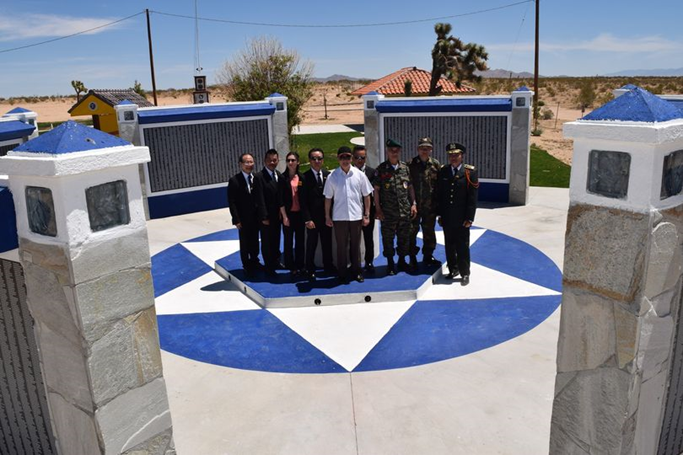 Any war also has the cost that must be paid dearly for, in which the priceless of loss, detriment, misfortune is still the living human. Since the end of the Second World War, the number of USA Military Forces service personnel who died in the Vietnam War is the most. They had sacrificed their living in serving both the United States of America and Vietnam, battling alongside the allied Republic of Vietnam troops to defend Peace, Freedom, Independence, and Prosperity for South Vietnam against the invading of the Vietnam communist party led by Ho Chi Minh under the commands and aids of China and Soviet Union communist parties.

Nowadays, the United States is in danger of being socialized, communized by the China communist party’s indirect attack. Socialism and communism only bring suffering, poverty, injustice, and crime, like China, Vietnam, North Korea, Cuba, and Venezuela. And most dangerous is China with the devil ambition of always wanting to usurp over and tyrannize the entire earth, which its biological weapon, the coronavirus that has been causing suffering and death to the whole world, is a concrete example. The above events have demonstrated that during the Vietnam War, the U.S. soldiers fought alongside the allied Republic of Vietnam Military Forces troops to defend South Vietnam against the China communist party’s invading by using its minions, Ho Chi Minh and the Vietnam communist party in disguise of “liberate populace”, is appropriate and very necessary, just like the situation of Korea.

Thus, those things mean that they and the allied Republic of Vietnam troops had served as part of the safeguard of Peace and Justice for the whole world against the global enemy: socialism, communism, and the China communist party.

Their sacrifice and credit we cannot requite. What we can do is to remember and appreciate, thank and help their families, and continue and achieve their ideals and goals they have not yet.

After the Vietnam War ended, the Government and people of the United States had established a Monument of them, the Vietnam Veterans Memorial in Washington, DC.

For the people of South Vietnam, as refugees from communists belonging to the Republic legitimate regime of Vietnam before 1975, after nearly 45 years since the day South Vietnam lost to the Vietnam communists, Mr. ĐÀO Minh Quân was the only and first person to have done the similar one of such heart-touching and meaningful work. His genuine boundless patriotism and love to his populace did and persisted engaging, zestfully dedicating so many great efforts and achievements, sacrificing his youth, millionaire properties, fame, family, and personal happiness, to have bravely patiently endured many dangers and hardships during more than 51 years. Having spent too much full-hearted mind in devoting almost his life for the mission of helping the populace, protecting and saving his homeland, since he was a young soldier of the Republic of Vietnam Army, together with allied U.S. troops to defend South Vietnam, and now in the United States, as an elderly refugee from communists, elected as the third President of the Republic regime of Vietnam, as well as being honored as His Veneration of National Merits, by more than 8 million referendum votes from Vietnamese people in Vietnam and around the world.

He was the first person to successfully expose Ho Chi Minh’s fake identity to the world public on May 19, 1989, at UNESCO, proving that Ho Chi Minh was not a Vietnamese named Nguyen Ai Quoc, but was a Chinese communist, the Mao Zedong’s spy, assigned the task of infiltrating Vietnam to carry out a plot to usurp the country and create a genocide.

Moreover, Imperial Duke ĐÀO Minh Quân used the significant remarkable historic victory as the principal foundation to sue the Chinese communist invaders and the Vietnam Communist Party for their crimes of creating suffering, wars, genocide, destruction, killing, robbery…etc. In Vietnam by usurping power from the National Government of Vietnam led by Prime Minister Tran Trong Kim, on August 17, 1945, and (in Vietnam) deliberately generating the war to France to subjugate the North, and then the South by the war against the United States and the Republic of Vietnam. His significant lawsuit in the striking criminal case, which has shaken the histories of Vietnam and the world, was triumphantly adjudged recently by the International Environmental Court in the United States, with the amount of compensation of $38 trillion along with the arrest warrant for those criminals. Furthermore, from that amount of compensation, he also commits to present $22 trillion to the Government and people of the United States.

He was the founder of the New Democracy doctrine, for peace, freedom, fairness, and happiness in common for both Vietnam and the world, expressing his immense love for Vietnam and all humanity, which Vietnam is the first place to practice and globally later.

In the mission of saving his homeland, helping the populace since still being a young soldier of the Republic of Vietnam Army in Vietnam, he never forgets the allied U.S. combatants, Government and people, since they began engaging in the war to help South Vietnam. From his gratitude, feeling directly through tactile action by his own hands of labor force to pay respects and memorize and commend those American Military Forces comrades-in-arms, and express the indebtedness to the U.S. Government and People, he and his colleagues had built a memorial in the harsh environment of the desert, day of hot sunlight burning skin, night of coldness chilling to the bone, and completed in June 2020, at Tu Nghia Duong, Adelanto desert, 10800 Sierra Road, Adelanto, CA. 92301, a base and Sacred Historical Landmark Place of the Third Republic of Vietnam, the place where at its still in the early period, he had been training himself of will, fortitude, patience, endurance in harsh and dangerous situational conditions, lack of convenience while praying to the Supreme Creator, Gods and Buddha, meditating, and studying books, documents for more than 20 years, to find a most satisfactory complete solution to help people and save the homeland, and that place also happened many miracles at that time and after then.

That Hexagon Monument, containing six double black walls of cemented granite, engraved the names of the 58,721 United States Serviceman-women, who had died in Vietnam, engraved onto both surfaces of those six walls. These walls were built around a circular base of blue cement, which circumscribes with a white internal hexagonal star, and has an altar for Vietnam’s His Holiness Imperial Duke Tran Hung Dao at the center, with the brilliant lights the shining of which people can see from 5 – 10 kilometres away.

The Hexagon Memorial is all the anti-communist Vietnamese people’s remembrance, showing gratefulness to them and U.S. Government and People. Its poignant nostalgia, as like the Vietnam Veterans Memorial is in Washington, D.C, is a symbol of connecting the past and present, creating sympathy for and deep understanding of the Vietnam war and each other’s grief, between the righteous genuine patriots loving Peace and Justice of the two populaces, Vietnamese and American, and also making the relationship between the two Governments closer, towards the mutual goal for the peace and prosperity of the world: to eliminate communism, dissolving the China and Vietnam communist parties.

For you, the USA Military Forces personnel still or no more in service and the personnel of Republic of Vietnam Military Forces, as well as the USA patriots and the Vietnamese compatriots, besides visiting the Vietnam Veterans Memorial in Washington D.C for recalling in esteem, it would be full of a sense of conscience and emotional experience, as you visit that Historic Sanctuary, touching those six walls with commemorating, heartfelt gratitude and honoring those American Combatants and those of the Allies and their families, as well as acknowledging profoundly to the Government and people of the United States, and then burning incenses at the stele of Five Vietnamese Immortal Generals, the Flag Post and the Shrine to commemorate wholeheartedly with appreciation, etching the merits of, and exaltation the 316,000 valorous, perseverant and unyielding combatants of the Republic of Vietnam Military Forces, the people who had devoted their living to defend Independence, Freedom, Peace and Happiness for South Vietnam.

The significance and purpose of their dedication to the Vietnam War for the ideal of Peace and Righteousness are never valueless and wasteful.

Despite lying down, they never “die”, their heroic spirits have ever become immortal, making the Military Forces of the USA, the Republic of Vietnam, and Allies be the pride and inspiration for many next generations to follow. Those spirits will forever be the sunlight to dispel the darkness of communists’ crimes. Their soul is always with us, all together assisting in making the great U.S. Presidents’ motto: “Save and Make America Great Again” and message to eliminate communism, be fulfilled, as well as to help the mission of “To Regain Ancestral Lands – To End Populace’s Suffering” of entire Vietnam populace led by President ĐÀO Minh Quân, to be accomplished. It is certain that, under the Supreme Creator’s providence and the brilliant, tolerant, merciful leadership, full of virtue and wisdom of Imperial Duke ĐÀO Minh Quân – The Provisional National Government of Vietnam/Third Republic of Vietnam will be successful, bringing freedom, happiness, peace for Vietnam and entire South East Asia. Especially after He and the entire Vietnamese people have won the momentous lawsuit of $38 trillion USD against the China Communist Party and Vietnam Communist Party, having determined the fate of atheist communist regimes in Asia and all around the world.

The Military Forces of the USA and Allies have arranged and been fully present everywhere at the crucial locations of Asia and Pacific-Indian Oceans.

When, by order of the International Environmental Court, the warrants of confiscating the property and apprehending for the criminals of China and Vietnam communist parties have been executed, the ideal and purpose of these heroic soldiers’ sacrifice for Vietnam and the United States will be realized. April 30, 1975, must be forever the final day of the loss of nationhood in Vietnamese history, bringing honor for the United States and the Freedom countries to have their commitment fulfilled to the ally Vietnam. Let the other successive dates of April 30 not be the National Sorrow day, but be the days of Vietnam National Serendipity, Flourishing, Prestige, as the Third Republic of Vietnam is on the Motherland. Justice must enforce, fairness must carry on. These Dead Heroic Serviceman-woman esteem must fully restore deservedly because their Justness, Righteousness, is always brilliant.

Please pray to the Supreme Creator, Gods, and Buddha, to bless the United States of America, Vietnam, and the world!