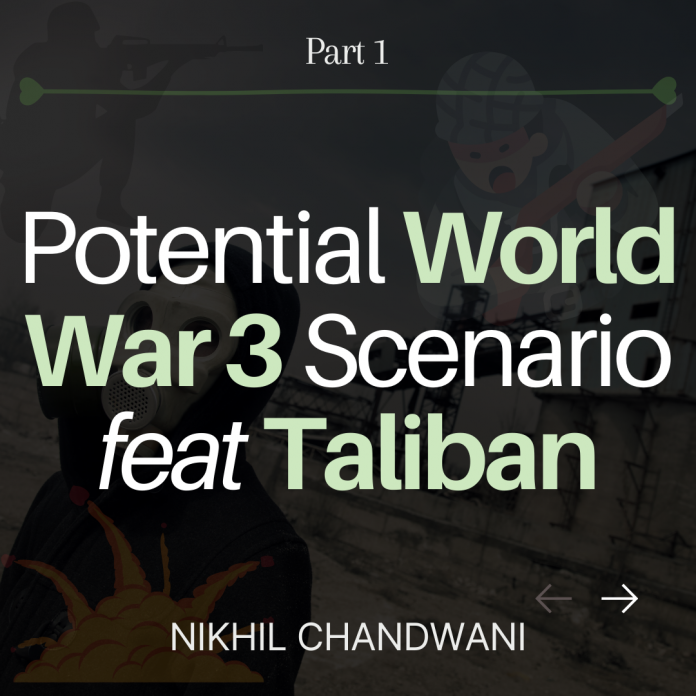 In the world of cruise and ballistic missiles, hypersonic weaponry, cyber-warfare, autonomous and automated weapon systems, and chemical and nuclear weapons of mass destruction, how would World War 3 Shape Up? Who would side with whom? What will cause the war in the first place? Will anyone survive? This piece explores the hypothetical futuristic timeline of World War III.

We will explore the timeline of the event that would lead up to our imaginary World War in this first part of the series.

6th July 2021: The U.S. evacuates Bagram Airfield, the largest military installation in Afghanistan since the 2001 invasion.

15th August 2021: Afghani president Ashraf Ghani flees the country as capital falls to Taliban. Kabul, the last major city in Afghanistan to hold out against the Taliban offensive, has fallen in the hands of militants.

17th August 2021: Abdul Ghani Baradar, a militant who fought side-by-side with the one-eyed cleric Mullah Omar during the Soviet-Afghan War, is declared the President of the Taliban. Bureaucrats of the last government flee Afghanistan. Soldiers switch sides, and ethnic cleansing to enforce religious laws soon take place. Taliban starts shaping domestic policy for the next two months. News is censored, and North Korea-like fortification is underway.

30th August 2021: Seeing how the Taliban won the war against the United States, North Korea’s Kim Jong Un reintroduce medium and long-range missile tests as a provocation. China is silent, but there is an accelerated movement of equipment, components, materials, and, in all probability, technology for both ballistic missile and nuclear weapons programs. The U.S. condemns the act but stays silent.

15th September 2021: Pakistan’s continued political instability and a ‘dying’ economy lead to coup d’etat. The army takes over Islamabad. The U.S. condemns the act, plans sanctions, but they’re not implemented.

20th October 2021: After two months of awkward silence and close to no media presence, the world wakes up to a piece of hazardous news. Two of the nine tactical nuclear weapons go missing in Pakistan. Satellite feed suspects a classic heist from the Taliban. The U.S. is shocked. They’re forced to retaliate.

29th October 2021: Pakistan-Afghanistan border, now controlled by the Pakistan Taliban on one end and Afghanistan Taliban on the other, becomes a militant zone. Unable to place their drones in Pakistan to start lost nuclear weapon search, the United States soon strike a deal with India.

9th November 2021: India allows the United States to park its drones in India’s Kashmir in exchange for the Kashmir belongs to India announcement from the President of the United States. Pakistan is baffled but says nothing.

2nd January 2022: Russian, Belarusian, and Kazakh military units move towards the Ukrainian border. Russian spies now immediately target Russian defectors who had fled Russia. Russian forces in Crimea are seemingly about to launch an artillery barrage at Ukrainian borders. However, they don’t attack. Satellites spot a few Chinese doctors accompanying the Russian and Belarusian forces; no one understands why.

24th January 2022: China’s defense minister, General Wei Fenghe, is spotted wearing a brown suit and with nearly a dozen senior members of the Taliban in Afghanistan. Miguel Díaz-Canel, Cuba’s President, is also seen in the picture. China offers COVID vaccines to the Taliban.

5th February 2022: In a Taliban-style takeover, Al-Shabaab takes over Somalia’s capital Mogadishu. The government surrenders without a fight. The White Widow, Samantha Lewthwaite, declares herself the new President.

6th February 2022: Samantha Lewthwaite, an international fugitive in hiding, back in the limelight, is not forgiven by MI5, MI6, and the CIA. The plan is to unleash hell in Mogadishu, but The White Widow is back in hiding. The USA wants Osama like (wo)manhunt in Somalia, but without committing the past blunders. A US-led blockade is put in place in Somali Current Marine Ecosystems—in the Indian Ocean, and pirates are targeted.

2nd March 2022: The West wakes up to the news that the U.S. has started striking North Korean facilities after a provocative missile launch from the North Korean regime under Kim Jong Un, mistakenly thought to be a direct attack against U.S. carrier groups stationed in Korean waters. On the same day, the Chinese Peoples Liberation Army conduct a series of massive combat drills near Kashmir, where drones of the United States are parked.

4th March 2022: Satellites spot a few Chinese doctors accompanying the Chinese Peoples Liberation Army. Experts suspect a new virus might be in the pipeline. The war is inevitable in more than one form.