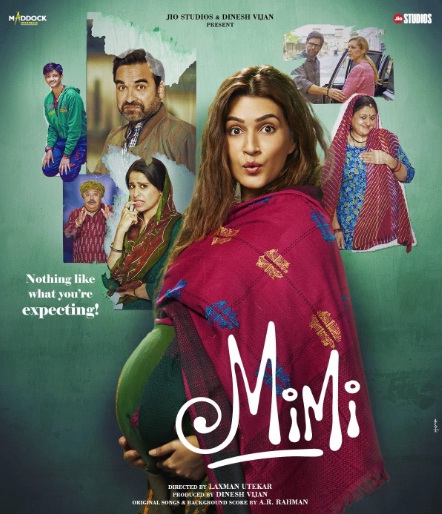 Bollywood may or may not have understood the real meaning of surrogacy but this film is a good start to it.

A 25-year-old girl living in a small town is highly motivated to fulfil her ambition about becoming an actress in Mumbai. She is offered a huge amount of 20 lakh by a couple who want her to bear their child. It was all going according to the plan of the stubborn protagonist, but soon there comes a point where everything starts to mess up.

Things progress as per the ambitious plan of our stubborn protagonist, albeit to a certain point. Life can be so unpredictable at times. The doctor predicts a possible danger on the life of the child; she talks about a psychological disorder after conducting the test. After hearing the test results, the couple back off from the adopting the child and leave frantically, leaving Mimi midway.

Surrogacy, a procedure where a woman (the surrogate) offers to carry a baby through pregnancy on behalf of a couple, and then return the baby to the intended parent(s) once it is born, has been restricted in India for a reason. Infertile couples from foreign countries frequenting India to find a surrogate, suitable to bear their child, is a practice that’s largely prohibited given the ethical and social implications.

The dreams of the protagonist are broken until the baby is born. Upon the birth of the child, the doctor tells everyone that the child did not bear any disease and it was just the mistake which might have committed by the doctor earlier that are bound to happen when a child is in the womb. Apparently, it was a test gone wrong which the previous doctor was not able to catch.

Since Mimi had not opted for abortion, the baby is born. Mimi decides to take care of him. All goes well in life, the child has been accepted like their own and he is much loved. But soon after the happy trail, sadness is dawned upon Mimi’s family when the actual parents of the child come into the picture. They are back to take the baby with them.

Mini says a straight no but since they are the biological parents and this was a surrogate contract, Mimi has to comply with the law. At the end, Mini is under pressure to return the child. They leave to drop the child but since the movie is all about the miracle, one can witness it at the very end. The foreign couple has decided to adopt an Indian girl and let the boy be with her mother ‘Mimi’. So finally all’s well that ends well.

The film is able to keep the audience’s attention intact with humour and drama.

Charming character curves and performances raise the seemingly predictable tale. The film seamlessly oscillates between drama and comedy, without losing its grip.

Mimi offers a light-hearted, yet moving take on surrogacy and its repercussions. It even cleverly steers people to adoption. There’s a catch here though. The film is well-intended but the adoption segment gets an idyllic approach and not realistic to ensure closure that can be misleading. There is already a lot of misinformation on the adoption process in our country, and a certain part of the story adds to the cesspool of inaccurate facts. That, being passed off as cinematic liberty is hard to digest.

Kriti Sanon plays Mimi, a ‘young and fit’ woman in small town Rajasthan. She isn’t looking to feed her family, but wishes to be a Bollywood star, a dream that she senses could become a reality when an American couple comes looking for an Indian oven to bake their bun in. Pankaj Tripathi plays the conniving driver Bhanu, who sets it all up.

I would rate this movie 4/5 for the emotional yet fun timing of the characters.