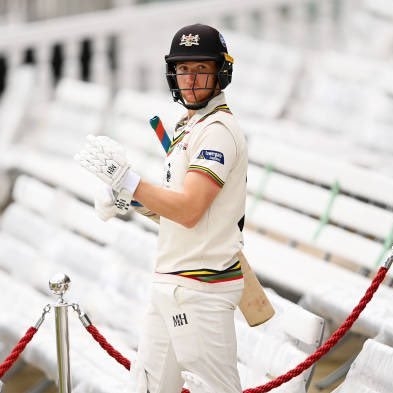 Playing his first Test after serving suspension for old racist tweets, pace bowler Ollie Robinson showed aggression, staring into batsmen’s eyes and even giving Ravindra Jadeja a send-off during his five-wicket haul against India at the Trent Bridge here.

“It was friendly banter,” said Robinson.

“I was trying to get them out of their bubble and play a few shots. They were batting well. But they were pretty defensive and I wanted KL Rahul to play some shots. It was all good fun out there,” he added after the end of third day’s play of the ongoing first Test on Friday night.

Robinson’s debut Test in June — against New Zealand –sparked controversy after racist tweets, he had posted as a youngster between 2012 and 2014, emerged on social media.

The England and Wales Cricket Board took swift action by banning him, for those racist tweets, in June. However, he was reinstated early last month following a suspension for eight matches — five of them suspended for two years — and a fine of 3,200 British pounds. He became available for the series against India.

“It was important for me to show everyone that I am the real deal on the field and try to get the scrutiny off me. It was a proud moment for myself and my family; a moment I will cherish for a long time.”

The right-arm pace bowler, who is known to bowl tight lines and lengths and get steep bounce from the surface said that being suspended cast doubts in his mind.

“It was tough. Probably the toughest few weeks I have had in cricket to be honest, or in my life, actually. It affected not only myself but my family. But luckily it all came good today.”

Robinson had, in his old tweets, targeted multiple sections of the society. He admitted he was naive and didn’t realise the enormity of it back then.

“I was a young, naive guy. I made a lot of mistakes. Not just those tweets. I had negative press when I got sacked from Yorkshire as well,” he said.

“But I have learned a lot. I have grown as a person in that time. I have tried to develop myself as a person in the last ten years. I am father now, as well, and I have just tried to make myself the best person I can be. I hope people will be able to see that.”