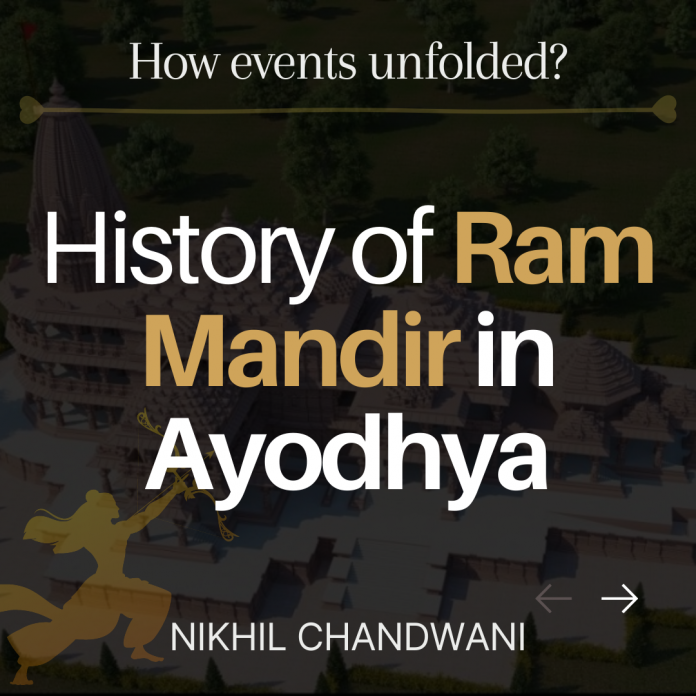 Prabhu Ram, the Avatar of Vishnu, was born in Ayodhya, on the banks of the Sarayu river. His rule of India became the model of powerful harmony, success, and justice.

One of these temples was swept away by the Sarayu river. The fate of another (Harismiriti temple) is a puzzle, but the other three were beautiful temples with numerous visitors from around the Indian subcontinent, including the temple at the Janmabhoomi.

Later, Hindus restored and got back Ram Mandir many times during Akbar and Jahangir time. But it was Aurangzeb who finished his great-great grandfather’s work and built a massive mosque on the Ram Mandir site.

Hindus tried hard to reacquire their Ram Mandir, and there were a lot of wars fought. Since Ayodhya was ruled by Nawabs and later by the British, they couldn’t win the battles. But, the prayers for Ram and Ram Navami never stopped.

In 1885 Mahant Raghubar Ram filed a lawsuit in court. British judge accepted that invaders destroyed Ram Mandir and built a mosque. The judge called it damaging, but he couldn’t change the status quo as well.

In 1946, Akhila Bharatiya Ramayan Mahasabha (ABRM) renewed the agitation to claim Ram mandir. On December 22, 1949, they placed Ram Murti in Temple. Nehru, being Nehru, got angry and ordered Dist Administration to withdraw the idols. The Dist Magistrate didn’t follow the directions, saying it would lead to riots. The police locked the gates so that the public, Hindus, and Muslims, could not enter. However, the gods were settled inside, and priests were permitted entry to perform regular worship. So, the mosque had been converted into a de facto temple.

Then BJP, under the leadership of Lal Krishna Advani, made the construction of Ram Mandir their motto. Advani did the Rath Yatra and spread the agitation across India. Mulayam Singh murdered 28 Karsevaks and stated that he would kill hundreds more to protect Babri Masjid. Hindus were very, very angry after this.

Based on this anger and rath yatra, BJP formed First Govt in UP.
On December 6, 1992, angry Karsevaks who wanted to avenge the firing squad of Mulayam and inspired by speeches of Advani and other leaders destroyed the Babri Masjid.

Later. Terrorist Dawood Ibrahim carried out Mumbai blasts to avenge Babri Masjid’s demotion. Then the Mumbai riots transpired. Then, the case went on in court. The case went on and on until 2019. On November 9, 2019, the court accepted with evidence that there was a Ram Mandir before the masjid and gave permission to construct the temple.

The creation of the State of Pakistan in 1947 lead to Millions of deaths. Pakistan has destroyed almost every Hindu temple. Hindus are on the verge of extinction in Bangladesh. Ram Janmbhoomi is the place where Shree Ram was born, and finally, on this date (August 5) last year, Bhoomipoojan was done. I am writing this as an appeal to everyone who blames Hindus for destroying the Babri Masjid. Hindus have lost huge states, thousands of temples, and thousands of acres of land. Ram was born in Ayodhya. It is our moral right to visit & worship the place of our faith. Stop blaming us. We have suffered enough.