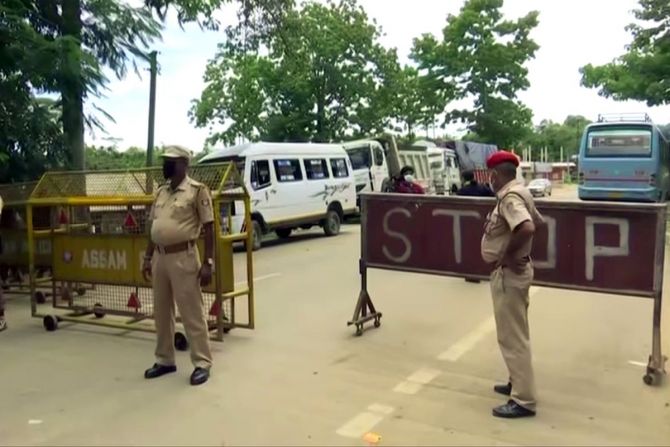 Amid the 13-day long “economic blockade” and with hundreds of Mizoram bound goods laden vehicles stranded, two Assam Ministers rushed to trouble-torn Assam-Mizoram inter-state borders on Saturday to facilitate the resumption of the movement of vehicles between the two states.

Due to the “economic blockade” on National Highway-306 in Assam’s Cachar, supply of essential commodities, transport fuels and medicines to Mizoram has been acutely hit since the bloodiest border clash and firing that left six Assam policemen dead and 100 others including civilians of the two states hurt on July 26.

Officials said that Assam’s Urban Development Minister Ashok Singhal and Environment and Forest Minister Parimal Suklabaidya accompanied by the Deputy Commissioner and Superintendent of police of Cachar district are “holding talks with all stakeholders” at Lailapur, the entry point to Mizoram.

“All efforts are being made to resume the movement of vehicles between the two states specially the Mizoram bound goods laden trucks and other vehicles,” a Cachar district official said.

About the latest development, Mizoram’s Information and Public Relations minister of state (Independent Charge) Lalruatkima said in Aizawl that Assam’s minister Singhal informed him that all vehicles stranded on NH-306 would cross the border by Saturday evening. “We are grateful to both Hon’ble CMs of Assam and Mizoram for relentlessly working towards restoration of peace between the two states,” the minister tweeted.

Mizoram Health Minister R. Lalthangliana on Saturday said in Aizawl that besides the essential commodities and transport fuels, Mizoram has been facing severe crisis of vital medicines. “Covid patients are dying for want of medicines. Seriously ill patients are in dire need of life-saving drugs…” the Minister said in a video message.

“With the rise in the number of Covid cases, we are finding it extremely difficult to take care of the patients who are in dire need of oxygen given the limited supply due to blockade. Other basic medicines and necessities of Covid management including PPE kits and vital drugs are still stuck at the border,” the Minister said.

Assam and Mizoram held a crucial ministerial level meeting on Thursday in Aizawl where they decided to maintain peace along the inter-state border and welcomed the deployment of neutral central forces, and agreed that they would not send their respective forces and officials to the troubled border areas.

“Representatives of governments of Assam and Mizoram agree to take all necessary measures to promote, preserve, and maintain peace and harmony amongst the people living in Assam and Mizoram, particularly in the border areas,” said a joint statement, issued after the August 5 meeting.

The joint statement said that both state governments also welcomed and agreed to take forward the initiatives taken by the Union Home Ministry and the two Chief Ministers to remove tensions prevailing around the inter-state borders and to find lasting solutions to the disputes through discussions.

After the Aizawl meeting, the Assam government on August 6, withdrew its advisories and other circulars to facilitate the return of the normalcy along the inter-state borders.

Soon after the July 26 border clash and violence the Assam government had asked its citizens not to visit Mizoram and those staying in the neighbouring state to maintain utmost caution.