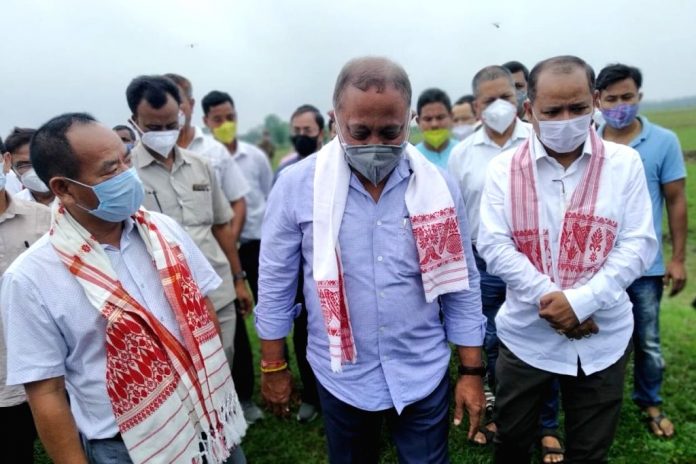 (IANS): Amidst sporadic incidents and simmering tensions along the interstate borders of Assam, Mizoram, Arunachal Pradesh, Nagaland, and Meghalaya, security has been further tightened and ministers and top officials visited the border areas to ensure there is no further escalation.

Officials in Aizawl said that Mizoram Chief Secretary Lalnunmawia Chuaungo and his Assam counterpart Jishnu Baruah would hold a meeting next week on the border issues.

Assam’s Environment, Forest, Border Protection and Development Secretary Gyanendra Dev Tripathi, accompanied by district officials, on Thursday, visited the troubled areas along the border with Mizoram and talked to the local people.

Meanwhile, Meghalaya Chief Minister Conrad K. Sangma said in Shillong that he would soon talk to his Assam counterpart Himanta Biswa Sarma on the border issue.

Meghalaya Health Minister Alexander Laloo Hek, who is one of the two BJP MLAs in the state, recently met Sarma in Guwahati and discussed the border issue.

An Assam government statement said that in view of border row leading to exacerbation of tension at Joyrampur-Chilonibasti close to the Assam-Arunachal Pradesh inter-state border, state Environment and Forest Minister Parimal Suklabaidya on Friday visited the areas and talked to the officials and local people to defuse the tension and to restore peace and normalcy.

Union Home Minister Amit Shah, while presiding over the North Eastern Council meeting in Shillong in January this year, had urged all the states in the region to solve their boundary disputes by August 15, 2022, when the country celebrates 75 years of Independence.

Encroachment in border areas, and various unlawful activities, including attacks and abductions, infrequently took place along the inter-state borders of the northeastern states leading to major incidents.

After District Magistrate-level talks between Mizoram and Assam on Wednesday, Mizoram’s Kolasib Deputy Commissioner H. Lalthlangliana on Friday said that three makeshift camps were erected at the trouble-torn area by state police after mutual agreement but the Assam Police recently damaged two of these, leading to the tension. Security forces are deployed on both sides of the borders to prevent any fresh untoward incident.

Lalthlangliana said that tension also erupted last month after two farmhouses on the inter-state border were torched by unidentified people on June 5.

Since October last year, several inter-state border skirmishes have taken place along the Assam-Mizoram borders and over 50 people were injured and more than 25 houses and shops had been set on fire on the Assam side.

Following the intervention of the Union Home Minister, Union Home Secretary Ajay Kumar Bhalla, top Home Ministry officials and both Chief Ministers, central para-military troopers were deployed along the border to prevent fresh troubles after a series of clashes and blockades on the National Highway 306.

At the directive of Chief Minister Sarma, Suklabaidya on Friday visited areas on the border with Arunachal Pradesh, following reports of encroachment and destruction of forest from other side leading to tension.

Suklabaidya, who had visited the area last month too, said the people of both the neighbouring states would have to live in peace and harmony. “We must shun confrontation and resolve our problems in an amicable manner. And for that to happen we must restore peace and tranquility and live in peaceful coexistence,” he said.

He appealed to the MLAs and the local people to prevent encroachments of forest land and ensure that trees were not felled and the environment is protected as “the brunt of deforestation has affected everyone”.

“The present Government is not only trying to bring about a permanent solution to the border disputes with our neighbouring states at the highest level but also exploring ways for finding a solution by way of out of the court settlement,” he added.