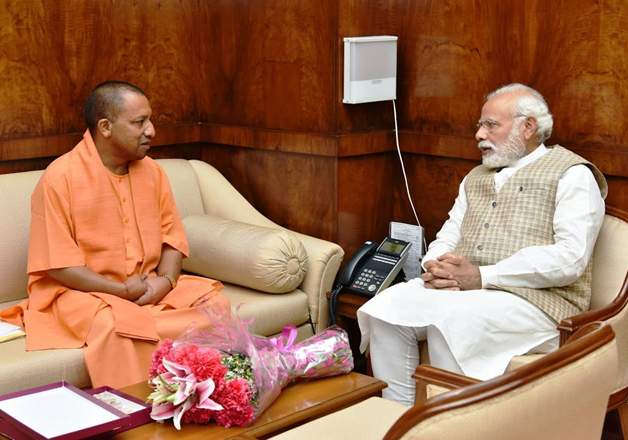 BJPs thumping victory in the Zila Panchayat polls in Uttar Pradesh is the blessing of ‘Janta Janardhan for development, public service and rule of law, Prime Minister Narendra Modi said on Saturday.

In a tweet, the Prime Minister said, “BJP’s glorious victory in the Uttar Pradesh Zila Panchayat polls is the blessings of ‘Janta Janardan’ for development, public service and rule of law. The credit for this goes to the policies of Chief Minister Yogi ji and the tireless hard work of the party workers. Hearty congratulations to the UP government and the BJP organisation for this.”

The BJP on Saturday registered a stunning victory by winning 65 out of the 75 seats in the Uttar Pradesh Zila Panchayat polls.

“The state government is continuously working for the development of all under the guidance of Prime Minister Narendra Modi. This victory is a symbol of people’s faith in BJP’s policies,” Nadda tweeted.

In another tweet, Nadda said, “Message is clear from Zila Panchayat polls that people of Uttar Pradesh are with the BJP’s agenda of development and good governance. I salute the people for their faith and affection towards BJP. I once again congratulate the Uttar Pradesh BJP leadership and the workers.”

Union Home Minister Amit Shah also congratulated Adityanath, Swatantra Dev Singh and the party workers, and said, “Under the leadership of Prime Minister Narendra Modi and Chief Minister Yogi Adityanath, the BJP government will continue to set new standards of progress by fulfilling the aspirations of the farmers, poor and deprived sections of the state.”

Congratulating the UP CM and the party cadre, Defence Minister Rajnath Singh said, “This victory is the result of Yogiji’s leadership, good governance of the state government and the efforts and dedication of the workers.”